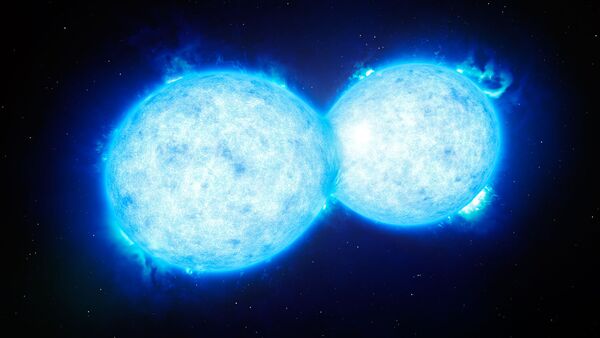 © Photo : ESO
Subscribe
The double star system was discovered by astronomers studying the Tarantula Nebula region of the Large Magellanic Cloud, the third closest galaxy to our Milky Way.

Our Destiny? Researchers Find ‘Cosmic Zombie’ That Eats Planets
Two stars which orbit so close they are actually touching have been discovered about 160,000 light-years from Earth in the Tarantula Nebula, the most active region of star formation in the Large Magellanic Cloud.

The stars are known as VFTS 352 and take just over one Earth day to orbit each other; their centers are just 12 million kilometers [7.5 million miles] apart.

"In fact, the stars are so close that their surfaces overlap and a bridge has formed between them," explained the European Southern Observatory [ESO], which announced the discovery on Monday.

"VFTS 352 is not only the most massive known in this tiny class of 'overcontact binaries' — it has a combined mass of about 57 times that of the Sun — but it also contains the hottest components — with surface temperatures above 40,000 degrees Celsius."

The stars were observed by astronomers at the ESO using its Very Large Telescope array, the world's most advanced optical instrument, capable of reconstructing images with a resolution equivalent to distinguishing the two headlights of a car at the distance of the Moon. 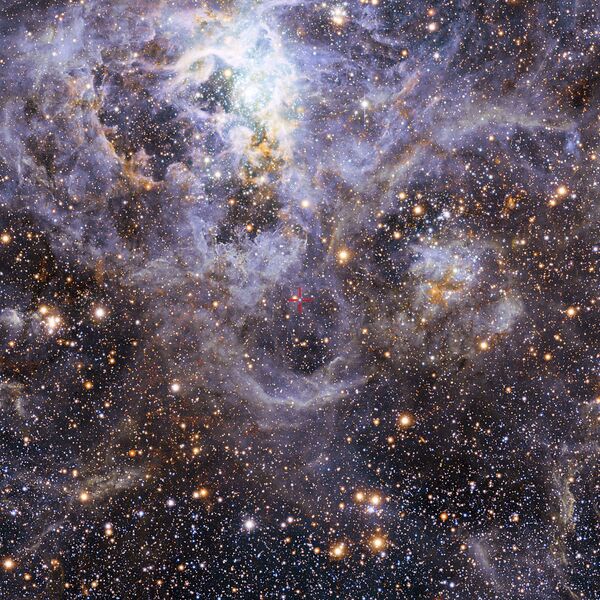 Location of VFTS 352 in the Large Magellanic Cloud
© Photo : ESO
The current state of VFTS 352, in which the two stars share about 30 percent of material, is very rare because such a phase in the life of stars is very short; the researchers believe that the system will soon reach its end in one of two ways.

"If it keeps spinning rapidly it might end its life in one of the most energetic explosions in the universe, known as a long-duration gamma-ray burst," said Hugues Sana, one of the authors of a paper published  about the stars, called 'Discovery of the Massive Overcontact Binary VFTS 352: Evidence for Enhanced Internal Mixing.'

Astronomers Launch Search for ET in Potential 'Alien Megastructure'
While such an explosion would lead to the merging of the two stars into a rapidly rotating, and possibly magnetic, gigantic single star, the possibility remains that the stars remain separate, explained Selma de Mink, another scientist working on the project.

“If the stars are mixed well enough, they both remain compact and the VFTS 352 system may avoid merging. This would lead the objects down a new evolutionary path that is completely different from classic stellar evolution predictions."

"In the case of VFTS 352, the components would likely end their lives in supernova explosions, forming a close binary system of black holes. Such a remarkable object would be an intense source of gravitational waves," said de Mink.