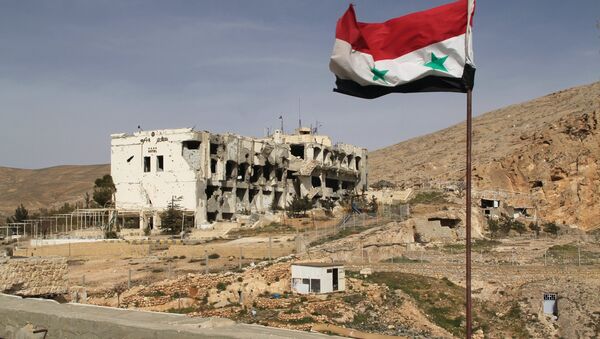 The Russian air group in Syria has carried out 934 sorties in less than a month, the General Staff said Thursday.

Since the beginning of its operation in Syria on September 30, the Russian Aerospace Forces have carried out 934 sorties in Syria, destroying a total of 819 terrorist facilities, the Russian General Staff said Thursday.

Terrorists in Syria have lost offensive capabilities amid the Russian airstrikes and are deserting en masse to Turkey and Jordan, Andrey Kartapolov, head of the Russian General Staff Main Operations Directorate said.

The Syrian Army continues its offensive in the provices of Aleppo, Latakia, Idlib, Homs, and Damascus, Kartapolov said.

Russian Aviation Destroys 72 ISIL Targets in Syria
"Combat operations are being conducted around those locations where the Russian aviation is not used, while the Syrian Army uses its heavy artillery against concealed fire units," he elaborated.

Russian forces have struck a bridge over the Euphrates river in Syria's Deir ez-Zor province, cutting off supplies for Islamic State militants from Iraq, Kartapolov added.

"A key part of the supply chain is a bridge across the Euphrates river in the region of Deir ez-Zor. Today, Russian pilots carried out a surgical strike on this object, which resulted in the bridge becoming impossible to use for terrorists," he told reporters.

According to Kartapolov, this supply route from Iraq was located by Russian drones.

"I wish to underline that the strike was carried out in an area, which, according to our American partners, is under the complete control of IS units," he noted.

Some field commanders are reaching out to the Syrian Army, proposing local ceasefires and negotiations, Kartapolov added.

The leader of a militant gang in Syria's Aleppo region sustained serious injuries in a battle with Syrian government forces, and his group has been defeated, the he went on to say.

The Islamic State has stopped the shelling of Damascus amid an offensive by Syrian government troops, the General Staff spokesman said.

"In spite of stubborn resistance by the militants, their encirclement continues to steadily shrink, block after block is freed. The most obvious result of this operation is the fact that, for the first time in quite a long time, the shelling of Syria's capital has stopped," he told reporters.

"During fighting in the southern suburbs of Aleppo, a leader of the al-Walid gang, so-called Sheikh Ahmad, was seriously wounded by Syrian government forces, and the gang was completely destroyed," he said.