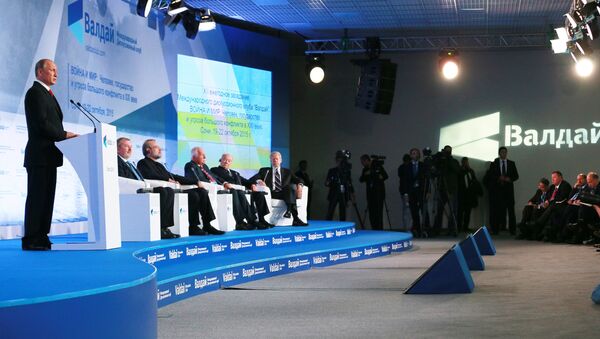 Russian President Vladimir Putin is taking part in a plenary session of the Valdai International Discussion Club in Sochi on Thursday.

The 12th annual meeting of the club, titled "Societies Between War and Peace: Overcoming the Logic of Conflict in Tomorrow's World" takes place of October 19-22 in the southern Russia's city of Sochi.

"The advent of nuclear weapons has made it clear that there can be no winners in a global conflict. There could be only one outcome — guaranteed mutual destruction," Putin said during the annual Valdai International Discussion Club session.

"It turned out that the mankind, in an attempt to create more destructive weapons, has made ​​a big war meaningless. By the way, the generation of world leaders of the 50-60-70's and even 80's really considered the use of military force to be an exceptional measure," the president added.

China Rides to the Rescue of Britain's Stalled Nuclear Program
However, the restraining effect of nuclear weapons has been devalued in today's world, he stressed.

"Some may even have gained an illusion that in case of a world conflict, one side may emerge victorious without irreversible, unacceptable, as experts say, consequences for the winner," Putin said.

Russia's leader stressed that the dialogue on Strategic Arms Reduction Treaty should be continued, but the United States' withdrawal from the Anti-Ballistic Missile (ABM) Treaty has made it difficult.

"Regarding the talks on strategic arms reduction, the dialogue must be continued. However, the unilateral withdrawal of the United States from the treaty, which is the cornerstone in terms of the balance of forces of international security, from the ABM Treaty, has put the entire system in a very, very difficult situation," Putin said.

"Today the Iranian nuclear problem has been solved. As we have said, Iran poses no threat and has never posed any," Vladimir Putin said.

The fundamental basis of the modern international security — the ABM Treaty — has been destroyed under the pretext of the nuclear missile threat from Iran, Putin told reporters.

Iran’s Supreme Leader Approves Nuclear Deal
"The reason, which has apparently urged our US partners to create a missile defense system, has disappeared," he added.

Iran's alleged threat was an attempt to mislead the world and tip the balance of world powers, Russia's President stated.

It's extremely dangerous to impose one's will on geopolitical rivals and allies with Iran being an apt example, Putin stressed.

While discussing political, military and economic competition in the world, the Russian president stressed they must be in line with moral norms and rules.

Simmering Row Leads to Power Struggle in Eurozone
"It is crucial that this competition must be within the framework of certain political, legal, moral norms and rules. Otherwise the collision of interests is fraught with deep crises and dramatic failures," Putin said.

"The global information space is being shaken by the wars today, so to speak. The only correct view and interpretation of events is aggressively being imposed, certain facts are being falsified or ignored. We have all become accustomed to labeling and creation of an image of the enemy," Putin said the session of the annual Valdai International Discussion Club.

Russia is not concerned about the promotion of "democracy" near its borders, but by NATO's military buildup near them, Vladimir Putin said.

"All this, in my opinion, causes our legitimate concern and, of course, we need to work on this. We are prepared, in spite of all the difficulties; ready [to work] on the same acute issue of the missile defense system beginning with today," Putin noted.

According to him, not "democratic values" approaching Russia's frontiers worry Moscow, but the Alliance's military infrastructure's advance.

Russia, following the example of Washington toward Moscow could speak of the need to democratize the United States, however such a move is at least impolite, Putin said.

"Is it possible to imagine that we would introduce an aim of the US democratization in our domestic law? It is at least impolite," he elaborated.

According to him, it is difficult to agree with claims that the United States is not seeking to change Russia's political system if the US legislation has a direct reference to a stated goal of democratizing our country.

'New Neighbors' Are Resurrecting Old Rivalries in The Balkans
Military force remains and will continue to be a tool of international politics, Vladimir Putin noted.

"Military force, of course, remains and will undoubtedly continue to be a tool of international politics for a long time," he said.

The Russian leader added that the question remained whether the force will be used "only when all other means are exhausted, when it is necessary to withstand common threats."

"The United States is using bogus excuses, punishing severely everyone who dared to violate US unilateral sanctions. You know, this is probably not Russia's business but as we are taking part in a discussion club, then I will ask you a question: Is it the way to treat allies? No this is the way to punish vassals that dared to act on their own, they are punished for bad behavior," Putin said.

He added that European companies are suffering from such measures

According to Vladimir Putin, the current situation in Ukraine is dangerous for Russia but it was not Moscow who created this crisis.

"It certainly poses threat to us, but was it us who created this situation? Russia's position is that we… we accept any choice [of Ukrainian people] but we are against this kind of power change, it is bad for any country in the world and for a former Soviet state it is totally unacceptable," Putin said at the Valdai International Discussion Club.

Uncontrolled migration processes lead to the rise in nationalism and intolerance, permanent conflicts in the society, Russian President noted.

"A shocking, mass, uncontrolled collision of lifestyles may lead to the rise in nationalism and intolerance, emergence of a permanent in the society," Putin said.

TTIP Trade Talks Continue Under Veil of Secrecy in Miami - Official
"Establishment of economic blocs by means of imposing conditions, will undoubtedly fail to make the world safer and will only plant time bombs in the soil for future conflicts," Putin said at the Valdai International Discussion Club.

He added that it was necessary to "search for ways out and compromises, as only compromises can create a long-term system of relations in any sphere, including economy."

The capture of Iraq's capital Baghdad or Syria's capital Damascus would give the Islamic State group a springboard for global expansion, Vladimir Putin said.

"Just think about it, in case of the capture of Damascus or Baghdad, the terrorists would practically gain the status of an official authority," he elaborated.

"The international community should realize who we're dealing with. An enemy, in fact, of civilization, humanity and world culture," Putin added.

Russian Warplanes Destroyed 819 ISIL Targets in Syria Since Operation Began
A clear distinction is needed between Islam and lies and hatred that terrorists spread under the guise of religion, he added.

"We need to clearly draw the line between lies and hatred spread by the militants under the guise of Islam and true Islam, with its values ​​of peace, family, good deeds, helping neighbors and respect for traditions," Putin said.

Russia's President stressed that Iraq and Syria must be freed from terrorists, these groups cannot be allowed to expand to other regions.

"What we think needs to be done to support the long-term settlement in the region is social, economic, and political revival. And ensuring, above all, that Syria and Iraq are freed from terrorists, and that these are prevented from moving their activity to other regions," Putin said at the Valdai International Discussion Club.

In order to achieve this, all forces, including the two countries' government armies, as well as Kurdish militia and various opposition groups, must unite in the fight against terrorism, the president said.

Turning to the issue of Syrian settlement, Putin stated that it is "clear that a military victory will not itself solve all problems, but it will create conditions for the main thing: the start of a political process."

Russia's President noted that Washington's goal in Syria is to overthrow the country's president Bashar Assad, while Russia aims to help Damascus in its fight against terrorism.

"The US goal is to get rid of Assad. Probably so. Our goal is to defeat terrorism, fight terror, help President Assad defeat terror, thus creating conditions for the start, and, I hope, successful conclusion of the political settlement process. I believe this is the only right way," Putin said at the Valdai International Discussion Club.

The president noted that Syria is in need of large-scale financial and humanitarian aid to "heal the wounds of war," calling to begin work on creating roadmaps for the revival of the region and its infrastructure.

"Now it is necessary not to undermine, but to revive and strengthen public institutions in conflict zones," Russia's leader said.

"Of course, we believe that the Syrian conflict is not only about fight against terrorists and terror aggression, even though this terror aggression is evident and terrorists just want to take advantage of problems inside Syria. And one should separate terror threat from internal political problems," he said.

Russia's operation in Syria is carried out in accordance with international law, Vladimir Putin said, expressing hope that the airstrikes will have a positive impact and help create conditions for political settlement.

"After a request for support by Syria's official authorities, we made a decision to begin a military operation in this country. Once again I underline: it is completely legitimate. It's sole purpose is to promote peace," he said.

The president added that he hopes Russian airstrikes will have "a positive impact on the situation" and help Damascus "create conditions for further action in regard to political settlement."

Russia is being criticized for conducting airstrikes in Syria, but these critics never say which targets we must and must not hit, Russia's leader said.

Intelligence Data Exchange Underway at Baghdad Info Center - Iraqi Official
According to Russia's President, Moscow and the West may soon begin exchanging information on the exact locations and movement of militants as part of an anti-terrorist operation in Syria.

"We see that in the framework of the anti-terrorism operation, gradually, though not as fast or actively as we would like, contacts are improving between defense departments," Putin said.

Putin also stressed the importance of the Russian-US deal on flight safety in Syria, which was recently signed by the two countries.

"We are also close to beginning exchange of information with our Western colleagues on the positions and movements of militants," he added.

The Valdai Club, established in 2004, aims to promote dialogue between the Russian and the international intellectual elite, and to foster independent, unbiased scientific analysis of political, economic and social events in Russia and the rest of the world.