The Empire of Chaos is in a Jam 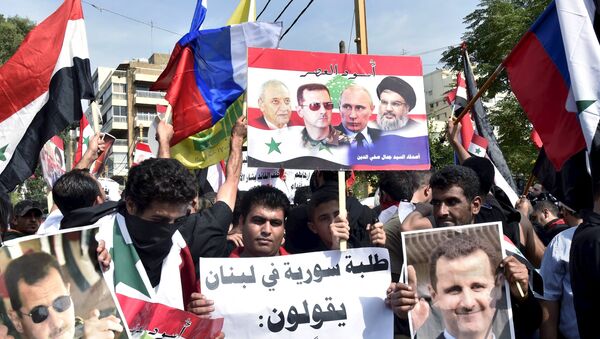 Pepe Escobar
All materials
The no-fly zone in Syria already exists. It is run by Russia and Washington is unable to jam it.

NATO is desperate. The Pentagon is desperate. Imagine waking up one day in Washington and Brussels just to realize Russia has the ability to electronically jam — detect, trace, disable, destroy — NATO electronics within a 600 km range across Syria (and southern Turkey).

Moscow Ready to Cooperate With Washington on Syrian Crisis
Imagine the nightmare of row after row of Russian Richag-AV radar and sonar jamming systems mounted on helicopters and ships jamming everything in sight and finding every available source of electromagnetic radiation. Not only in Syria but also in Ukraine.

For their part, caught in the crossfire as sitting ducks or headless chickens, that mighty ideological aircraft carrier known as the USS Think Tankland was left dabbling with the four options left for Washington to "achieve its goals" in Syria.

The first option is containment — which is exactly what the Obama administration has been doing. The recipe was proposed in full by the Brookings Institution; "containing their activities within failed or near-failing states is the best option for the foreseeable future."

World
Many in French Parliament Ready for Political Dialogue With President Assad
The second option is the favorite among US neocons and neoliberalcons; to weaponize the already weaponized opposition. This opposition ranges from the YPG Kurds — who actually fight on the ground against ISIS/ISIL/Daesh — to Jabhat al-Nusra, a.k.a. al-Qaeda in Syria and its Salafi-jihadi cohorts. Al-Nusra of course has been rebranded in the Beltway as "moderate rebels"; so this option means in practice the House of Saud weaponizing al-Qaeda while they fight under the cover of US air strikes.

Pure Ionesco-style theatre of the absurd. Compounded by the fact those apocalyptic nut jobs who pass as "clerics" in Saudi Arabia, as well as the Muslim Brotherhood, have duly declared jihad against Russia.

The third option will go nowhere; Washington allying with "Assad just go" and Iran — not to mention Russia — in a real fight-to-the-finish  against ISIS/ISIL/Daesh. Obama boxed himself in a long time ago  with "Assad must go", so he remains immobilized by a self-inflicted ippon.

The fourth option is the neocon wet dream; regime change, achieved, in theory, by what I call the Coalition of the Dodgy Opportunists (CDO), as in the NATO-GCC embrace, with a Turkish starring role and attached US air strikes, plus all those thousands of CIA-trained "moderate rebels" slouching all the way to Damascus. As if the Russian campaign did not exist.

In fact, for US corporate media, it's as if the overwhelming Russian massacre — and not "containment" — of "Caliphate" assets these past three weeks is not happening at all. Hubris has metamorphosed into huge embarrassment and finally into total omission.

The Obama administration's "Assad must go" diktat has also metamorphosed into a wacky version of a non-denial denial. It's plain obvious now that the Russia air campaign, way beyond ISIS/ISIL/Daesh, has destroyed the whole imperial game across "Syraq"; that same old mix of regime change, Balkanization, creating and keeping failed states, "isolating" Russia.

Moreover, and contrary to all the current rehash of Afghan mythology — where, incidentally, the Taliban continue to win in America's Longest War — Syria won't be a revisited USSR quagmire. On the contrary; while in Afghanistan in the 1980s the proverbial imperial game of using Salafi-jihadis against a secular government worked, as it worked in NATO turning Libya into a failed state, now Moscow reverse-engineered the process, smashing the Salafi-jihadis on the ground in conjunction with secular governments.

Which bring us to Iraq.

Next week, Iraq's parliament will vote on whether to request Russian air strikes against ISIS/ISIL/Daesh. Mowaffak al-Rubaie, former national security adviser to former Prime Minister Nouri al-Maliki, is convinced the vote will pass — even facing Sunni and somewhat Kurdish opposition.

A measure of Washington's alarm is that the new chairman of the US Joint Chiefs of Staff, Marine Gen. Joseph Dunford was forced to fly to  Baghdad to make sure this won't happen. In his own words, the Pentagon was consumed by "angst" when Iraqi Prime Minister Haider al-Abadi evoked the vote.

"Angst" is bound to persist. This is all about imperial spheres of influence. A "yes" vote, on the ground, means the Russian Air Force working in tandem with ground intel collected by Shi'ite militias such as the Badr Corps and Asa'ib Ahl al-Haqq to smash all fake "Caliphate" positions. And geopolitically, a "yes" vote signifies the ultimate humiliation — after all those elaborate multi-trillion dollar plans for the "Greater Middle East" which Shock and Awe in 2003 should have set in motion.

The USS Think Tankland's prescription for all the trouble in Syria is to beef up NATO, as in "send aid of all kinds" to "protect" poor Turkey.

Sultan Erdogan is possibly about to profit from a Chancellor Merkel-engineered 3 billion euro plan to "encourage" Ankara to keep on Turkish soil potential Syrian migrants bent on a peaceful invasion of the European Union. Thus the Sultan will have paved the way for being finally "accepted", in the long run, as a EU member.

Blogger Reveals How Assad (Probably) Flew to Moscow, Evading US Intel
Even that configuration does not prevent the USS Think Tankland from advising the creation of a NATO-enforced no-fly zone along the Turkish-Syria border, supported by American, Turkish, British and French troops.

Beltway, now we do have a problem. This no-fly zone is already in effect. And it's run by Russia. And you won't be able to jam it.

A quick final recap: the Empire of Chaos destroys Iraq; creates the conditions for the emergence of a Salafi-jihadi constellation, from al-Qaeda in Iraq to its Frankenstein, ISIS/ISIL/Daesh; does not get the oil (remember Wolfowitz's "We're the new OPEC"?); tries to destroy Syria for four years, unsuccessfully; and in the end Russia reinstates its Middle East sphere of influence as the real power fighting Salafi-jihadism across "Syraq".

If this is what passes for imperial planning, the Empire of Chaos certainly does not need enemies.