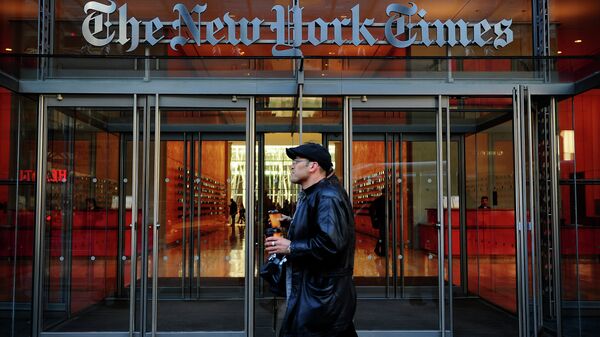 © AFP 2023 / Emmanuel Dunand
Subscribe
International
India
Africa
The New York Times and the Washington Post have "substantially underrepresented" the number of civilians killed in US drone strikes in Pakistan and Yemen over the last five years, according to a study.

Journalist Jeffrey Bachman studied the Times' and Washington Post's coverage of US drone strikes launched between 2009 and 2014 under President Barack Obama's leadership. Bachman chose the two papers as representatives of the "elite press."

"My conclusion," he writes, "both papers have substantially underrepresented the number of civilians killed in drone strikes in Pakistan and Yemen, failed to correct the public record when evidence emerged that their reporting was wrong and ignored the importance of international law."

Bachman analyzed 81 stories from the Times and 26 from the Post – all published within two days of particular strikes in Yemen and Pakistan.

The reporting in the two papers was compared to the London-based Bureau of Investigative Journalism's coverage of the same drone strikes. BIJ's methodology has been endorsed by the Center for Civilians in Conﬂict and Human Rights Clinic at Columbia Law School.

"This trend of underreporting of civilian casualties means readers are not being informed of the real consequences of drone strikes in Yemen and Pakistan," Bachman writes. "It represents a failure by journalists at these papers to view critically government claims regarding who is killed in particular strikes."

The study also found that the NYT and WP hardly ever framed the drone strikes in an international legal context.

"The Obama administration's lack of transparency and dismal reporting by the nation's top newspapers combine to protect the administration from accountability for the civilians killed during its drone strikes," Bachman writes.