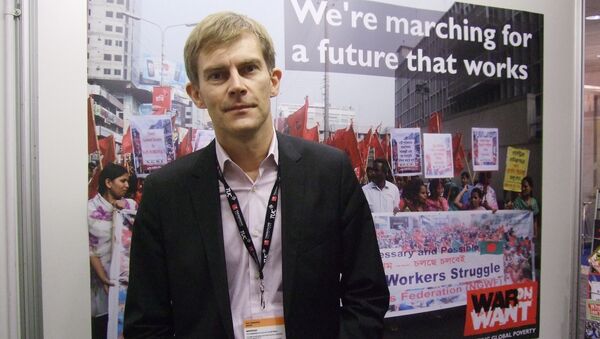 So Mr Corbyn, what made you appoint facism-apologist Seumas Milne? https://t.co/NCoqfuD9A3

His appointment wasn't just "morally and ethically wrong", it's "insane" (as is Milne himself).

Here it is, the definitive list of *insane* Milne quotes I could find in the 20 minutes before I left the office: https://t.co/QFf9eObBc0

You'd think from reading these attacks that Milne was some kind of wild-eyed, foaming at the mouth madman who needs to be tethered on a leash for public safety. Just about the only very bad thing he hasn't been accused of is being an "apologist" for Jack the Ripper — though no doubt, Cyril Waugh-Monger is working on that article right now.

Anyone who knows Seumas in person — as I do, can only laugh out loud at these ludicrous portrayals of a thoroughly decent and very thoughtful man.

I had privilege of working as @SeumasMilne deputy & can attest his 'world view' is rather more nuanced than this is https://t.co/wJwF4mTSD5

As usual, the tactic from the New McCarthyite attack dogs is to take their target's words out of context to try and turn 'middle of the road' readers against them. They did this with Jeremy Corbyn — and now they're doing it with Milne.

So, a man who has condemned the backing by the West and its regional allies of terrorist proxies in Syria, and who wants us to examine the link between western interventionist polices in the Middle East and the rise of groups such as Islamic State, is presented as a "supporter of terrorism". Someone who is against illegal wars, which put British soldiers in harm's way, is smeared as someone who supports British troops being killed. A man who says we need to acknowledge the achievements of communism as well as communist crimes is labeled a "Stalinist".

And someone who doesn't want a new Cold War with Russia, and who quite correctly blames NATO for the crisis in Ukraine, is denounced as a "Putin apologist".

If Seumas Milne made a career hacking the phones of dead soldiers relatives, he'd be a top lad. But he didn't so his name is mud.

In fact, most of the things that Milne is accused of, could more accurately be applied to his detractors. There is indeed a real Savoy opera topsy-turvy feel to the attacks. Milne is accused of being "pro-purge" by people who spend much of their time trying to "purge" — by smears and character assassination — British journalism of dissenting voices, who are actually more in tune with public opinion than they are.

He's called an "extremist" by cheerleaders of the greatest crime of the 21st century — the illegal Iraq war.

What can be more "extreme" than supporting — and defending — an illegal war fought on a blatant lie, that Iraq possessed weapons of mass destruction (WMDs), and which has led to the deaths of up to one million people?

As for it being "insane", Milne's appointment as Corbyn's Director of Strategy and Communications makes very good sense. He's a top journalist who knows how the media works. His father, Alisdair Milne was a popular Director General of the BBC, before being pushed out by Margaret Thatcher (surely a badge of honor), and Milne has held an associate editorial position at the Guardian for a number of years. He is very bright, and very charming and has exactly the right combination of skills that a modern spin doctor needs.

I have known Seumas for over ten years and wrote for him at the Guardian on a regular basis when he was Comment Editor of the newspaper. The New McCarthyites have been eagerly poring over pieces that he wrote and commissioned in their crude attempts to discredit him.

The fact is that Milne, as comment editor, threw the paper open to a wide range of voices from left and right. Genuine anti-war leftists found a platform which was denied to them in other outlets, but Milne also published articles by conservatives — including American conservatives, such as Charles Krauthammer (so much for the claim that Milne is "a man who never heard an opinion that he didn't filter").

In fact, the comment pages of the Guardian under Milne were probably the most vibrant of any British newspaper at the time, as Conservative MEP Daniel Hannan, hardly an ideological soul mate of Milne's, acknowledged.

Agree. @SeumasMilne, unlike those mocking him, has challenged convention and often been proved right i.e. Iraq. https://t.co/M7kTTrfiA6

Another conservative commentator Peter Oborne has also paid tribute to Milne, noting that unlike those mocking him, he has often been proved right.

@OborneTweets @SeumasMilne @Kevin_Maguire EXACTLY the point! The establishment commentariat does not set the rules — tho' they think they do

But the New 'left-wing' McCarthyites, unlike Hannan and Oborne, don't want media diversity and a wide range of views to appear in British newspapers. Their job is to narrow the range of opinions we hear in the MSM. Only people they approve of should be published — people with the "approved" pro-war, anti-Russian views on foreign policy.

These people have always had it in for Milne, (his strong support for the Palestinian cause is another reason they hate him) and his new appointment has once again brought them out into the open, fuming with indignation that a man they thought they had successfully branded as a "pariah" has now landed such an important job.

Milne is even being attacked for attending Winchester public school — if you're a member of the 'Elite Journos Club' and support illegal western wars, then your educational background doesn't come into it, but step out of line, and it's a case of "hey, he's a public schoolboy!"

@JeremyCorbyn4PM @SeumasMilne They are just slow to realize that people have become irritated with their "bun fight" schoolboy nonsense.

The good news is that the power of the New McCarthyites, as we saw from Jeremy Corbyn's stunning victory this summer, is on the wane. They were always a tiny group in number, but their message was amplified by the neocon media echo chamber. But the public is no longer listening to these people. They're sick of their endless warmongering and their double standards: they remember how in 2013 they so desperately wanted us to go to war with a secular Syrian government fighting ISIL.

The sheer nastiness of their ad hominem attacks and their obsessiveness repels more people than it attracts.

The more they attacked Corbyn in the summer, the stronger and more popular he became, and it'll be the same with Seumas Milne.

For the New McCarthyites the problem with Milne is not that he's likely to be a "disaster" in his new job, but that this clever, eloquent and resilient man is likely to be a great success and increase the chances of a Labour general election victory in 2020. And of course, a victory for a Corbyn-led Labour party in 2020 — on a genuinely democratic socialist platform — is the very last thing the allegedly "progressive", but in fact, extremely reactionary pro-war New McCarthyites want.