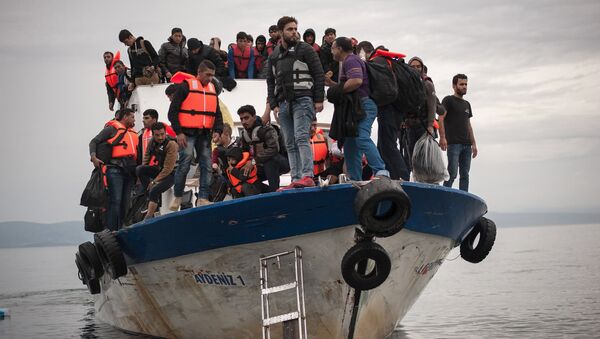 © REUTERS / Fotis Plegas G
Subscribe
Violent treatment of refugees by individual countries in the European Union is now common practice - as is the decision to pass laws controlling the migrant influx.

The Greek islands may not be able to build razor wire fences at sea — but they appear to be taking equally draconian measures to prevent any more refugees from arriving on its shores.

Along with dangerous high winds and strong tides, asylum seekers and migrants traveling by boat from Turkey to Greece are facing armed assailants who are targeting refugee boats, removing engines or puncturing the hulls of inflatable boats.

Reports have emerged of armed masked men in the Aegean Sea, disabling boats carrying refugees and pushing them back to Turkish waters.

Witnesses told Human Rights Watch that masked assailants, many of them armed, are intercepting and disabling boats carrying asylum seekers and migrants from Turkey towards the Greek islands in a deliberate attempt to prevent them from reaching Greek shores and with no choice but to be towed back to Turkey.

Having seen a 750 percent rise in the number of refugees attempting to reach the Greek islands since July, the country has resorted to drastic and underground methods to stop any more people coming ashore.

Human Rights watch along with other nongovernmental organizations have found evidence that Greek border guards are engaging in collective expulsions and pushbacks of migrants and asylum seekers — despite receiving condemnation from the Greek government.

One violent case of stealth border control at sea is that of a 38-year-old Afghan woman, who told Human Rights Watch that shortly after leaving the Turkish coast, a boat believed to be Greek, began to travel towards their vessel very fast.

"The men on board were dressed in all-black military clothes and boots that had no insignia on them. We couldn't see their faces because they were all masked.

"They were armed with pistols and very aggressive and they came right up to our boat. They cut the fuel line going to the engine, and took the cables. They broke the engine, and they hit me with the motor cable. They attacked four boats, us and three other ones. I speak Turkish, I lived in Turkey for two years, and I know they didn't speak Turkish."

Amnesty International and Greek media have also reported incidents in which Syrian and Afghan refugees have been detained at the Greek border police station for almost 24 hours before being transferred by bus to the Evros River and put on a boat back to Turkey.

Greek Prime Minister Alexis Tsipras recently ruled out joint coast guard patrols with Turkey on Greek waters. In an attempt to tackle the refugee crisis, whilst sending people back to where they came, it appears not just Greece, but many other EU countries have decided to go their separate ways.