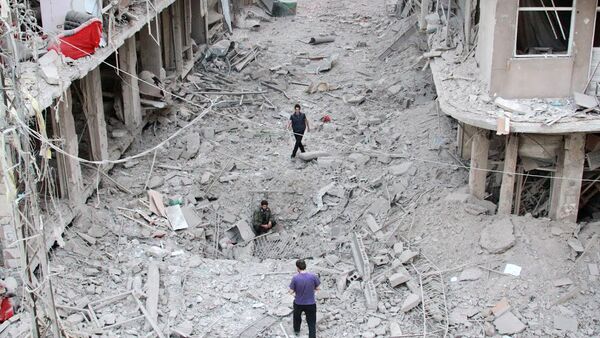 A correspondent from Russia's RIA Novosti descended into the catacombs of Damascus suburb of Darayya, discovering that in addition to fighting militants and jihadists on the land and from the air, the Syrian army has also taken the fight underground. Here is his story.

Using catacombs dug below the ruins of the city's suburb, the army and militants 'hunt' for one another underground, militants digging literally kilometers-worth of underground passages to escape areas surrounded by the army, to transfer men and materials and to move about much of the country.

The War in the Netherworld

Getting around the ruins of Darayya, one has to move quickly to avoid becoming a sniper's target. Somewhere overhead the bullets fly, from both militants and from friendlies. Together with army forces, we run into an ordinary four-story house, or rather, what remains of it. Once, this home was full of life, with people engaged in daily chores, working, dreaming of something, getting married and raising children.

Now all its former residents are somewhere far away –some running to other parts of Syria, others to Europe, others still perishing. Amid explosions from artillery and tank shells, their home's ruins have been turned into a shooting range for an infinite and deadly round of 'paintball.' And at the moment it's difficult to imagine that it can all be repaired one day.

Syrian Army Continues to Attack Terrorists in Damascus’ Suburbs
Suddenly, a Syrian army soldier throws aside some sort of dusty piece of cardboard, and below it, like a scene from an adventure movie, a square hole emerges to an underground 'city.'

Over the past three or four years that these areas have been held by militants, many kilometers-worth of underground tunnels have been dug. Using them, one can suddenly retreat from a house surrounded by the Syrian army, or conversely, appear face-to-face before the army, or even to their rear, and attack. The militants feel themselves at home in their 'underground Darayya.' For the attacking Syrian army, it is akin to a dark and foreboding woodland. But they too are trying to win in the war for the underground.

A tunnel at Daraya, Syria.

The passages are about half a meter wide, with a person being able to stand full-height. This is not a place for the claustrophobic; the tunnels are dug using special machines, resembling a lawn mower in their size and shape.

From Darayya, this 'underground kingdom' goes on for dozens of kilometers beyond the outskirts of Damascus. In places the tunnel ends, and it is necessary to come up to the surface, but a couple kilometers on it's possible to dive underground once again. Of course, navigating this underground world is possible only with the help of guides or maps.  Still, moving on the surface and underground, one can travel not only to a neighboring city, but even abroad –to Jordan or Israel.

We carefully follow the Syrian officer down into the underground. There are no steps along the way down. We have to use a long ladder which the military hides in a nearby room, to avoid the arrival of uninvited guests.

Descending three meters down, we move in single file, illuminating our feet using the flashlights of our mobile phones. Experienced 'tunnelers' tread softly, the dry earth crumbling under their feet. Talking or even sneezing is not allowed; just a few meters away there could be militants. Sometimes here, in this claustrophobic environment, firefights break out, so soldiers hold their rifles at the ready.

From time to time, our companion makes a hand sign – freeze. Then we listen in the silence, trying to hear the fighters before they hear us.

Fight for Syria: Russia at War with ISIL
Every five to ten meters there is a sharp turn, perhaps meant to confuse strangers looking to use the tunnel. Or perhaps the 'moles' artfully turned the tunnels on purpose in order to get to the right place. In any case, we must pay tribute to the talent of the unknown architects, who unfortunately did not spend their efforts on peaceful purposes.

The Syrian army uses the tunnels for various tasks. For example, to carry explosives and their fuses a maximum distance, blowing them up at just the right moment, cutting the militants off from access to their rear areas.

"The best result will be to blow up the corridor behind the militants when they are located behind our lines. Then they will find themselves in an underground trap, cut off from escape routes. They will then either surrender, die from hunger, or perish from our bullets," an officer sapper says.

However, such luck is rare, and in his memory, has happened only a few times. "The militants are well aware of the army's tactics, and behave cautiously. In a narrow corridor, if they notice the explosives or the fuse, they will not fall into the trap."

A short time into our journey, we have already traveled nearly a kilometer out from the positions held by the army. Breathing becomes more difficult; with the entrance further and further behind, there is not enough oxygen. The militants are somewhere close by. It is quite possible that above our heads there is a full-scale battle raging, and that Jabhat al-Nusra (al-Qaeda's branch in Syria) does not even suspect what is going on three meters underneath.

Let the Peace Return: Another Syrian Village Liberated From Terrorists
The sappers set the charges and begin their trek back to the entrance with the help of a white cord. When X hour comes, the saboteurs will put them to good use, blocking off the underground tunnel. Tunnels cut off from the militants can then be used by the army for their own purposes –to move secretly between positions.

The importance of this hidden war has been recognized by the Russian Air Force. The terrorists' underground fortifications and shelters have become one of the targets of Russian attack aircraft in Hama. "In the area near Jubb al-Zarus, a Su-34 bomber conducted an airstrike using guided bombs on underground shelters with a branched network of exits in different parts of the area," Defense Ministry spokesman Major-General Igor Konashenkov said at a recent briefing in Moscow.

In the meantime, the underground war continues.

The above article is a slightly modified version of the RIA Novosti correspondent's piece which appeared on the news agency's website on Thursday.