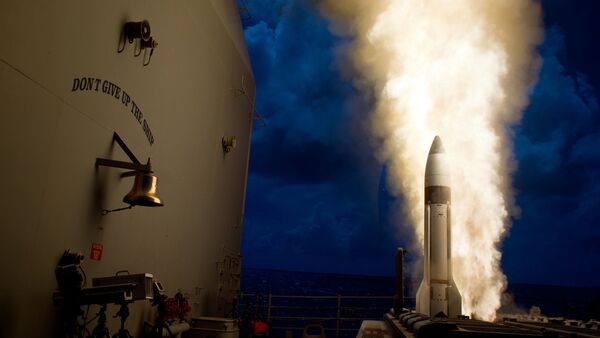 A recent test of the US missile defense system in Europe clearly confirms that the system is most likely aimed at Russia, not Iran, according to prominent Russian defense expert Vladimir Batyuk.

US Navy Tested Anti-Missile Defense in Europe for the First Time (VIDEO)
Prominent Russian defense expert Vladimir Batyuk told Ria Novosti that a recent test of the US missile shield in Europe clearly shows that the system is most likely directed against Russia rather than Iran.

"No one has ever had any doubts of the real goal [of the US defense system in Europe]. Moscow is well aware that in this case, Iran is little more than a pretext," he said.

He also questioned speculation that the test was allegedly conducted in order to send a kind of message to Russia. Batyuk recalled that a decision to deploy the missile shield was made at the beginning of US President Barack Obama's first term back in 2009.

His comments came a day after the US Navy destroyer USS Ross (DDG 71) successfully intercepted a ballistic missile with a Raytheon-made Standard Missile-3 (SM-3) in the North Atlantic Ocean during its Maritime Theater Missile Defense Forum drills.

US Takes Warmongering to Next Level With Missile Defense Test in Europe?
It was reported that this was the first time a SM-3 Block IA guided interceptor was fired on a non-US range and the first-ever interception of an imaginary ballistic missile threat in "the European theater."

The White House has repeatedly claimed that the US's European missile defense system is not aimed against Russia and is allegedly designed to repulse potential missile threats from Iran.

Moscow, in turn, wants legally binding guarantees that the US missile shield will not target Russia. Disagreements on the issue remain one of the main stumbling blocks in Russia-US relations.