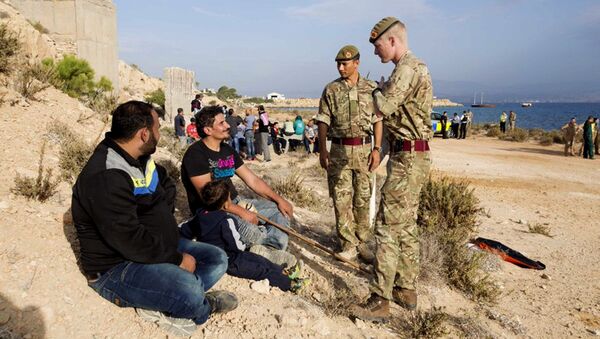 © AP Photo / British Forces Cyprus
Subscribe
Britain's Ministry of Defense has confirmed a number of boats carrying refugees have landed on the shores of a British Royal Air Force Akrotiri base in Cyprus.

Our statement on the migrants landing on the shore at RAF Akrotiri can be found on our blog https://t.co/MyuS6iT6yM pic.twitter.com/UJtEm0zjOw

​Cyprus lies around 160 kilometers from the Syrian coastline north east of the Mediterranean Sea and south of Turkey. It's the largest island in the eastern Mediterranean — but the third smallest country in the European Union where in the last two months, 128 refugees have had to be rescued from its shores.

Nearby Greece has received half a million refugees on its islands so far this year. According to the UN's High Commissioner for Refugees, 8,000 migrants land on Greek shores every day.

But the reason why so few asylum seekers choose to make the shorter journey from Syria to Cyprus could be that the island amended its asylum laws in 2014 restricting asylum seekers from bringing their family members once they had been granted the right to remain on the island. This is known as the right to family reunification — or to travel freely outside Cyprus.

Last year, only three percent of asylum seekers were granted refugee status, 56 percent were awarded a subsidiary protection, which means they are not allowed to bring their family members to the country and are granted fewer rights than a refugee.

This means many migrants live illegally on the streets — not in refugee camps — waiting to continue their journey to other European countries.

The distinct way Cyprus processes asylum seekers' claims in contrast to other EU countries is another example of isolated approach EU member states are taking towards the refugee crisis in Europe.

Hungary has closed off all its borders with neighboring countries, Britain is funding more fencing in Calais to keep migrants out of the UK, Slovenia has changed its laws to allow the army to be drafted in to help cope with the number of refugees crossing into the country and Croatia has begun following in Hungary's footsteps and sealing off its borders as well. 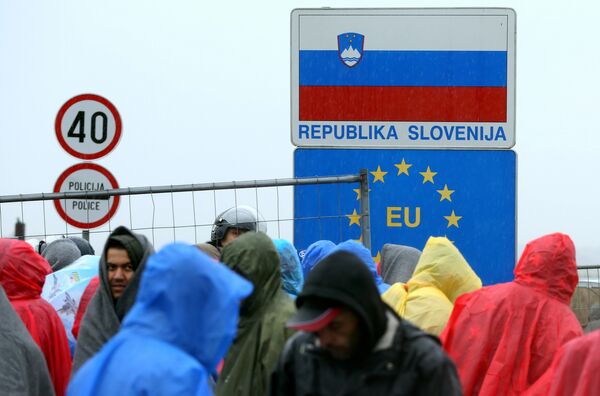 Migrants and refugees wait in the rain as they wait to enter Slovenia, at the Croatian-Slovenian border in Trnovec, on October 19, 2015.
© AFP 2021

Germany, expecting a million refugees by the end of the year holds an open arms approach, but is calling for help from Turkey to solve the crisis.

German chancellor Angela Merkel has offered Turkey billions of dollars in aid in return for containment of refugees and to stop them from continuing their journey to the EU. For this deal to materialize, Turkey wants visa restrictions limited, access to the EU's Schengen Zone and membership of the European Union.

Turkey's accession to the EU in return for a solution to the refugee crisis has also opened up discussion on the longest running diplomatic dispute in the West.

The Cyprus dispute — or Cyprus Question — shifted from a colonial dispute following the annexation of the island by the British Empire in 1914 and became an ethnic one in 1974. 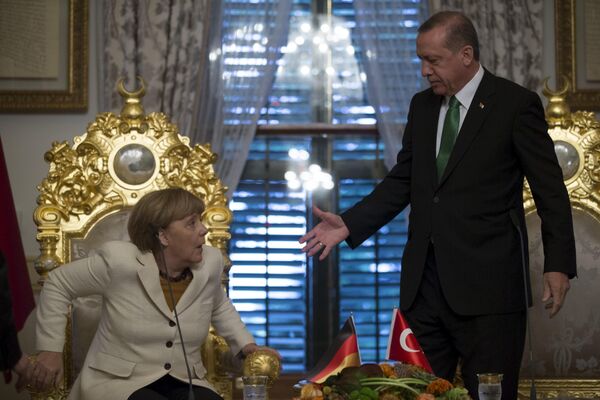 Turkish troops invaded northern Cyprus in response to a coup carried out by Greek Cypriot supporters and occupied what is internationally recognized as the Republic of Cyprus, forming the Turkish Republic of Northern Cyprus

The Mediterranean island was split into two. In 2004, Cyprus became a member of the European Union — but only the southern Greek Cypriot region, which only has international recognition from Turkey.

The refugee crisis appears to have further political ramifications. For Turkey to acquire EU membership and avoid further veto from Cyprus, House president Yiannakis Omirou told Sigma Live that it must officially recognize the Republic of Cyprus and open its ports and airports to Cypriot boats and airplanes and implement the decisions of the European Council.

"If Turkey complies [with the decisions] then and only then will it be possible for Cyprus to lift its veto."

But earlier this week, Cyprus' foreign minister said it would not end its veto of Turkey's EU accession negotiations, potentially thwarting EU leader's attempts to solve the refugee crisis.

"The reasons they [the negotiations] were frozen have not ceased to exist," Cypriot Foreign Minister Ioannis Kasoulides told Greek state broadcaster NET.

Refugees rerouting through Cyprus as they desperately attempt to escape war-torn areas highlights the disjointed approach by EU countries. The new migrant boats washing up on Cyprus' shores are an example of the rudderless approach by European leaders to the crisis and the political legacy it will leave on the make-up of the European Union.