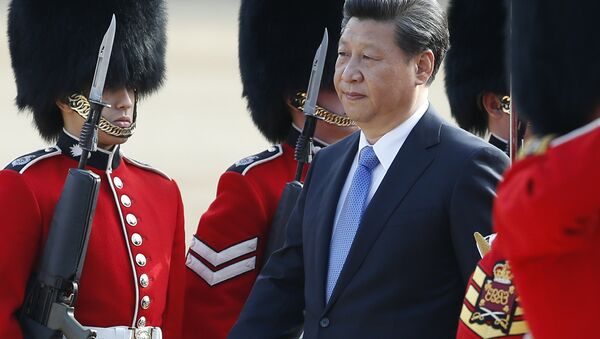 Alexander Mercouris
London-based lawyer
All materials
While western politicians and media slam "Chinese expansionism", it was China that was the target of the biggest aggression Asia witnessed over the course of the twentieth century.

Once upon a time the British had a reputation for being a polite nation.

That this reputation is no longer merited is shown by the boorish reception the Chinese President Xi Jinping, currently on a state visit to Britain, is receiving from sections of the British media and political class.

Some criticise China for all kinds of human rights violations.

Others gloat over China's (imaginary) economic difficulties, which they confidently predict — or hope — will lead to the fall of the Chinese government.

Still others discuss at ponderous length the "threat" China poses to its neighbours, warning of the need to draw red lines against "Chinese expansionism" in the South China Sea.

Some British political leaders have joined in.

John Bercow, the Speaker of the lower house of the British parliament, delivered a speech of welcome full of sly digs at the Chinese leader.

Jeremy Corbyn, the newly elected leader of the Labour party, in a not-so private meeting, lectured the Chinese leader about human rights, though he did also have the grace to admit China's achievements.

The Chinese must find this all astonishing.

China has its share of problems, as all countries do, but the scale of its achievement in recent years is unsurpassed.

A brief wobble in the Chinese Stock Market is not going to derail it. Suffice to say the same British commentators now predicting China's economic collapse, have been making that same prediction — and have been repeatedly proved wrong — for years.

As for China's relations with its neighbours, they are all without exception peaceful.

Left alone China would rapidly settle its disputes, as it did without prompting or threats from the West — and without any Western "red lines" — when it settled its border dispute with Russia in the 1990s.

It was the US and its allies, not China, that initiated the single greatest war — the Vietnam war — that Asia has seen since the defeat in the Second World War of imperialist Japan.

How Will China Respond if US Patrols the S China Sea?
It was the US — not China — that has twice used nuclear bombs in Asia.

It was the US, not China, which gave serious thought to using nuclear weapons during the wars in Korea and Vietnam — with China a likely target in both cases.

So far from being a threat to its neighbours, it was China that was the target of the biggest aggression Asia witnessed over the course of the twentieth century — the war of aggression waged against China by imperialist Japan.

As for being lectured on peace and human rights by the British, given the appalling history of British conduct towards China, the Chinese must find that nothing short of bizarre.

It was the British who forced the Chinese to buy British opium at gunpoint, who launched two military expeditions against China, who occupied Beijing and in an act of intentional vandalism burnt down the Summer Palace, and who supported the dictatorship of Yuan Shikai.

British museums and private homes are today stuffed with Chinese antiquities — the loot of these aggressions.

It was the British who also forced on China unequal treaties, and who seized Hong Kong, which they administered as their colony for over a century.

That the British are so able to forget their own history that they feel able to lecture the Chinese on peace and human rights with a straight face, is nothing short of astonishing.

That the Chinese put up with it as politely as they do is further proof that they — unlike the British — remain what they have always been: the world's most polite nation.