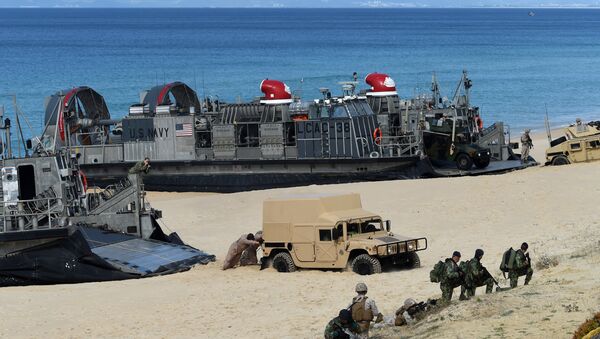 The aim of the ongoing large-scale NATO Trident Juncture drills is to demonstrate a readiness by the alliance to confront a threat “from the South,” Spanish Defense Minister Pedro Morenes said Wednesday.

Dozen A-10 Jets and 350 US Troops Arrive in Estonia for NATO Drills
MADRID (Sputnik) – Earlier in the day, the military exercise involving over 36,000 troops from 30 NATO countries and partner states, together with 140 aircraft and 60 ships, moved into its active phase. The drills, the largest NATO exercise in over a decade, is to be conducted in Spain, Italy, Portugal, as well as in the Mediterranean Sea and the Atlantic Ocean, and will end November 6.

“[The aim of the drills] is to check the functioning of NATO command and control and to show that alliance is ready to counter risks and threats coming from the south,” Morenes told the Spanish parliament.

He added that the fact that Spain is a host country for the exercises shows that the alliance trusts Madrid.

The first part of "Trident Juncture – 2015" — two-week-long command and staff drills that began on October 3 — wrapped up in Canada, Norway, Germany, Belgium and the Netherlands last Friday.