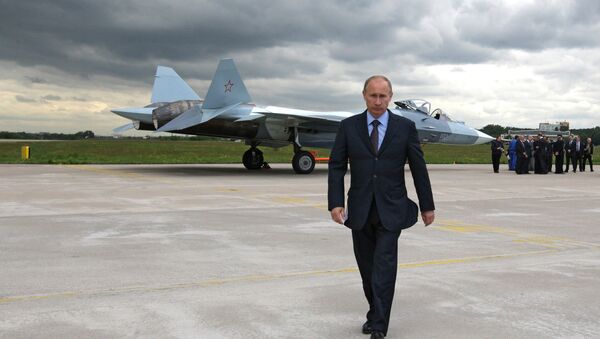 © Sputnik / Alexei Druzhinin
/
Go to the photo bank
Subscribe
Russia has caught the United States and its allies by surprise by successfully getting involved in Syria and de-facto becoming a key player in the fight against ISIL, said French academic and head of the think tank Grece, Alain de Benoist.

With his bold actions in Syria, Russian President Vladimir Putin showed everyone that international relations are quickly moving towards a multipolar world in which Russia will be a key actor that would change the existing balance of power, de Benoist wrote for Boulevard Voltaire.

The French academic added that Russia's airstrikes against ISIL targets in Syria are a major event in world politics.

"Russia has caught the United States and its allies by surprise. Due to his pragmatism, knowledge of geopolitics and strategic thinking, Putin has strengthened Russia's weight in international politics," de Benoist said.

On September 30, following a request from Syria's legitimate government, Russia launched a multinational aerial campaign aimed at assisting Damascus-led forces in their fight against a four-and-a-half-year old insurgency in the country.

US Seeks to 'Hold Russia Back' From Creation of Multipolar World
By creating an alliance with Iran, China and other countries within the Eurasian Union, Russia is changing the current geopolitical structure in the world, the French academic explained.

At the same time, Russia stepped up its cooperation with Latin America and BRICS countries in light of poor relations with the West. Earlier this year, Argentina's Ambassador to Russia, Pablo Anselmo Tettamanti, said that the two countries are currently experiencing their best level of communication in their 130-year-long history of bilateral relations.

Russia's relations with the United States and the EU became strained in 2014 after the West accused Russia of fueling the internal conflict in Ukraine, a claim that Moscow has repeatedly denied.