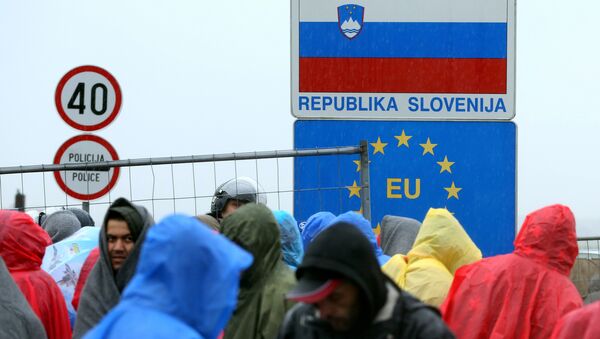 © AFP 2021
Subscribe
Slovenia allowed most of the migrants stranded on its border with Croatia to enter the country, after previously imposing caps on frontier crossing, media reported Tuesday.

So Why Are There So Many Young Males Among Refugees?
MOSCOW (Sputnik) – According to the BBC, Ljubljana has allowed almost 5,000 people, headed for northern EU states, to cross its border.

Croatia has opened its border with Serbia, the British broadcaster added.

Slovenia introduced earlier a daily limit of 2,500 migrants to cross its border, refusing Croatia’s request to put the number at 5,000, due to Austria’s own daily border crossing caps. Hungary, another migrant transit country, has closed its borders.

Over 710,000 migrants arrived in the European Union within the first nine months of 2015, according to the EU border agency Frontex, with Hungary and Slovenia just two of the many transit points for refugees on the route to the European bloc.

‘I Would Send All Illegal Immigrants to US’ - Hungarian Town Mayor
In the largest numbers since World War II, refugees are leaving conflict-torn countries in Africa and the Middle East, including Syria, in search of a better life in wealthy EU countries, such as Germany and Austria.

In September, the European Commission announced a quota scheme, providing for the resettlement of 160,000 refugees currently located in Greece, Italy and Hungary, throughout other European countries.