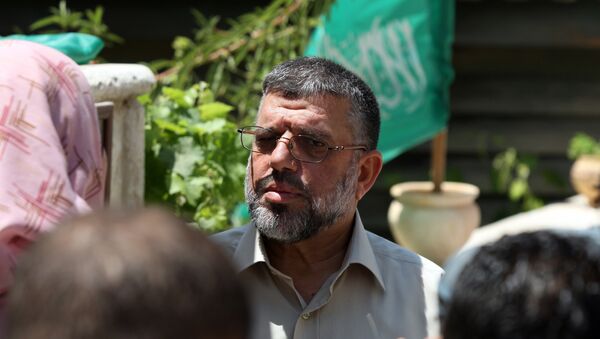 © AFP 2022 / ABBAS MOMANI
Subscribe
Israeli authorities have detained the leader of Hamas’s Palestinian Islamist movement, Hasan Yusef, on the West Bank and have accused him of inciting the current waves of terrorism, the Israeli Army’s press service reported Tuesday.

Netanyahu: Palestinian Incitement is 'Bin Laden Meets Zuckerberg'
TEL AVIV (Sputnik) – “Overnight forces from the Israeli Army together with the Israeli Security Agency detained Hasan Yusef, the leader of Hamas, in Beitunia, to the southwest of Ramallah,” the Army press service said in a press release.

A number of knife attacks and other altercations of terrorism over the last month have killed nine individuals and injured more than 70 Israelis. Israeli authorities have blamed Palestinian groups and the official leadership of expanding “a hate culture” on the streets.

“Yusef actively abetted and provoked terrorism, as well as publicly encouraged and praised attacks on Israelis,” the press release reads.

A new wave of violence in the decades-long regional conflict was recently sparked by skirmishes between Palestinian and Israeli security forces at East Jerusalem’s Temple Mount holy site in September.

Global Jewish Network Launches Action Against Israel’s Palestine Occupation
On Monday, media reported that Hamas had instructed its members to carry out terrorist attacks against Israelis on disputed territories of the West Bank and Jerusalem.

Hamas reportedly called a killing of an Israeli soldier on Sunday a "natural response" and "heroic," as well as a reaction to the "cold-blooded executions of the military of the occupation."

Gaza-ruling Hamas, classified as a terrorist organization by a number of countries including Israel, the United States, Egypt and EU member states, demands that Israel withdraws from the territories it seized during the 1967 Six-Day War, and which Palestinians see as their historic lands.