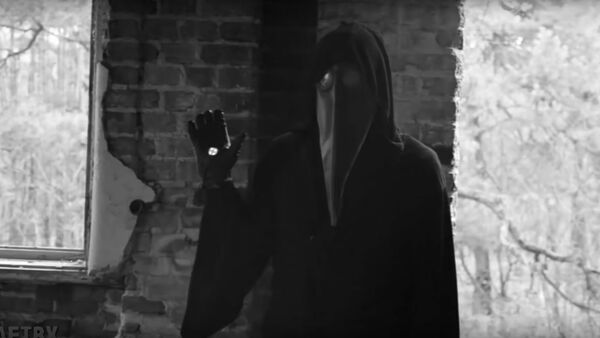 © aetbx
Subscribe
What is it: a serial killer’s message, an ad, or a terribly funny Halloween joke? Restless Internet detectives from around the world are racking their brains over a mysterious video that has emerged on the web – and could conceal some kind of a dark secret.

Under curious circumstances, a bizarre video has found its way to different corners of the world, causing a media frenzy. People around the globe are scrambling to solve the mystery behind the obscure images depicted in the footage.

This won't help you sleep any easier tonight: "This Creepy Puzzle Arrived In Our Mail — Gadgetzz" — https://t.co/OYpk2rrT4H

Sinister, mysterious clip appears on internet and nobody knows what it means https://t.co/jm68JIYo6J

Well, the video opens on a masked figure standing against a brick wall and features a disturbing soundtrack and enigmatic visual codes.

Johny Krahbichler, a tech writer, was the first to report on the video in his blog at Gadgetzz.com. According to Krahbichler, someone from Poland sent a mysterious CD to his company office last June. At first, Krahbichler didn’t pay much attention to the package, assuming one of his readers wanted him to “try out their software.”

Upon viewing, he realized that wasn’t the case.

“I was unsure what to think of it, but I found it very odd. I later reexamined it and started noticing the ‘codes’ and letters hidden all around the video. That’s when I realized it’s some sort of puzzle,” he told the Independent, adding that he was “a bit scared.”

Though Krahbichler considered the possibility that it was a practical joke, he decided to start asking around. The blogger turned to Reddit, hoping its users could help decode the meaning behind the video.

Some Reddit users created Spectrograms of the footage and uncovered a message reading “you are already dead.” The spectrograms also showed images of skulls, as well as gruesome images of one or multiple women being tortured.

Also encoded were coordinates to the White House.

Those new findings led some to speculate that whoever made the video could have nefarious intent.

“I was pretty scared when people started to suggest it’s a serial killer,” Krahbichler said.

He still has no idea who made the video, but further investigation indicated that he wasn’t the only one who received the footage.

Hubble Telescope Spots Mysterious Space Objects
A YouTuber from Spain, with the user name “aetbx,” uploaded the same video on his channel last May. While the post initially received little response, his views have recently skyrocketed.

According to aetbx, he received the DVD from a strange girl who claimed to have found it abandoned on a park bench.

“Our bets are that this is a indie videogame promotional, since our fledgling studios don’t have large budgets for ‘standard’ advertisement,” a Redditor known as 9u4d wrote in a comment beneath the YouTube post.

“What’s so amazing is the engagement, people are reposting it everywhere and there are so many comments around the web,” Krahbichler said.

Still, if this isn’t a promotional, the question remains: who made the video, and more importantly, why?