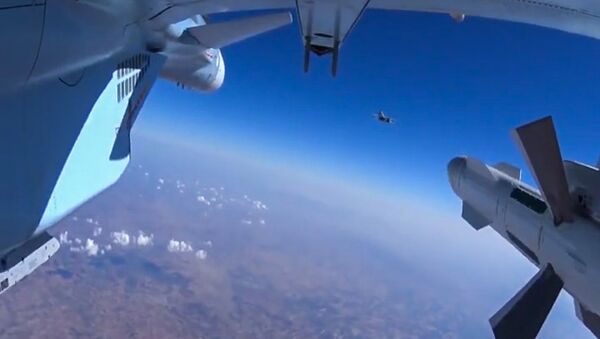 © Photo : Russian Defence Ministry
/
Go to the mediabank
Subscribe
International
India
Africa
The actions of the Russian Air Force in Syria are very effective, making it possible that soon ISIL will capitulate and the Syrian refugees will be able to return home, according to a political analyst at George Washington University.

“In the two [Persian] Gulf wars, the technique was one of a heavy bombardment campaign that would last for a month or six weeks and then ground troops would move in."

Russia Shows 'Impressive New Military Capabilities' in Its Syrian Campaign
"What we are seeing is a coincidence or a parallel effort between the air force and the ground campaign,” Michael told Press TV.

But in this case the “Syrian armed forces and the Russian advisors did not wait for five, six weeks to start a ground assault; quite the opposite. It took them a few days to follow up on what the air force has achieved in terms of cleaning up the landscape,” said Michael.

He further said that Russia has positioned its strategy and power structure in a way that it has made itself a magnet for other forces’ effort.

“Shia militias, the Kurdish militias, many Sunnis, Christians will all find the presence of the Russian military appealing. This is why I expect the surrender of ISIL troops, and forces soon will find many surrendering scenes on TV screens, and we will [hear] about this [on] the radio,” the analyst said, Press TV reported.

Michael further noted that there are coordinated efforts between different militias — Kurdish, Shias, Sunnis, Christians, with the Russian-Syrian/Iraqi troops, and that will help the campaign become more widespread.