Mexico Believes in Economic Merits of Relations, Not Sanctions 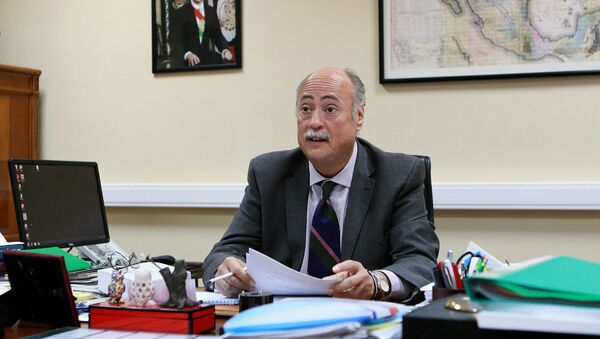 Mexico’s business decisions are based on projections of the benefits rather than on political motives, Mexican Ambassador to Russia Ruben Beltran told Sputnik.

MOSCOW (Sputnik) — In 2014, a number of Western countries followed the lead of the United States and imposed economic sanctions against Russia over its alleged involvement in the internal conflict in eastern Ukraine.

Cooperation With Eurasian Economic Union ‘Desirable’ Opportunity for Mexico
Beltran said that Mexican Interjet Airline was buying 30 Russia-made Sukhoi Superjet 100 (SSJ-100) passenger planes "not because of political decision but because it was a wonderful airplane for a very competitive price."

Trade between Mexico and Russia has grown but does not correspond to the countries’ importance in the global economy, Ruben Beltran said.

The envoy suggested that when he was appointed to visit Moscow in December 2012 "the trade amounted to about $1.4 billion, now it is almost $2 billion, but still we are not satisfied."

Beltran said that the two countries must cooperate and bring more businessmen together to improve the business climate.

"We are convinced that there are many opportunities in different sectors and we want to work very hard to improve it," he said.