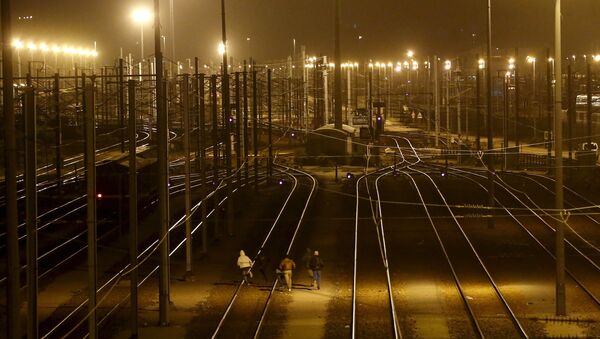 © REUTERS / Juan Medina/Files
Subscribe
International
India
Africa
Eurotunnel, the operator of Channel Tunnel between the United Kingdom and France, resumed its rail services after a short suspension on Monday over a large number of migrants at a French terminal, the company said.

MOSCOW, October 19 (Sputnik) — Earlier in the day, the Eurotunnel suspended its train services in both directions after migrants stormed the Calais terminal on the French side. There were 30-minute delays at check-in, and up to two-hour delays on the terminal, according to media reports.

"Our Passenger service has now resumed. Please plan to check in on time for your booked departure. Thank you for your patience," the company said via Twitter.

Europe has seen a massive influx of migrants this year, as people flee conflict and poverty in the Middle East and Africa. Tens of thousands of migrants have been trying to cross into the United Kingdom via the Channel Tunnel between Folkestone in Britain and Coquelles in Calais, northern France. At least 16 people are reported to have died in the attempt.

Paris to Deploy Additional Police Patrols at Calais Refugee Camps
Eurotunnel security services document over 37,000 attempts by migrants to illegally transit the Channel Tunnel since the beginning of 2015, primarily by climbing onto the top of trains bound for the United Kingdom.

Amid the migrant crisis, Channel trains have repeatedly been delayed. Earlier this month, Eurotunnel rail services were halted when over 100 migrants stormed the Calais terminal.