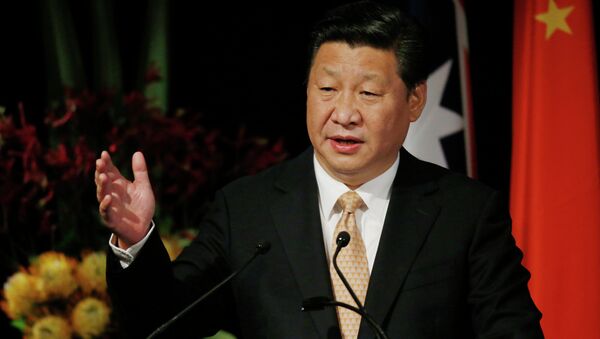 On the eve of his official visit to Great Britain, President Xi Jinping assured the world that China isn’t looking for an opportunity to replace the US as the “world’s cop.”

Xi told Reuters that, despite its rapid economic growth — and counter to what US officials seem to insist — China doesn’t have ambitions toward aggressive world domination.

“China was, is and will continue to be a force for world peace, common development and international cooperation,” Xi said.

Clash of Goliaths: US Incites but China Tries to Calm S China Sea Tension
"With the increase of its overall strength, China will be able to play a more active role in international and regional affairs,” the president continued, adding that Chinese military policies are based on self-defense strategy.

The head of Chinese state stressed that the internal affairs of nations around the world should be resolved without the interference of outside forces.

“China follows the principle of non-interference in other country's internal affairs and believes that international and regional hot spots should be resolved by peaceful means,” he pointed out.

Washington's Gamble: US Causes 'Chaos in Asia' by Trying to Counter China
The country “has been stepping up efforts for world peace and development not because it wants to become a ‘world cop,’ even less to take anyone' s place.”

He also added that China “will never seek hegemony, engage in expansion or impose its own will on others.”

Xi will visit the UK next week, on the invitation of Queen Elizabeth II.

According to media reports, the UK will seek China’s support for the country’s military strategy in the Middle East, as Britain plans to extend its operation from Iraq into Syria as well.

A number of contracts between both countries’ businesses are expected to be signed during the visit as well.