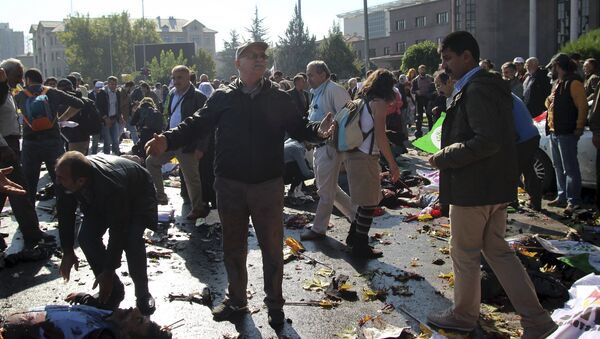 A court in Ankara delivered its decision on Sunday on the arrest of four suspects in the recent deadly terror attack in the Turkish capital, local media reported.

ANKARA (Sputnik) – On October 10, a double blast hit Ankara ahead of a peaceful anti-war march that was intended to call attention to the recent surge of violence in the Turkey-Kurdish conflict in the country’s south-east.

Turkey Hopes to Be in 'EU Family Photo' Soon

According to the Hurriyet newspaper, two individuals suspected of their implication in the crime were freed.

The court hearings were held behind closed doors and lasted more than 7 hours, the daily added.

The death toll in the twin suicide bomb blasts in the Turkish capital of Ankara has risen to 102, according to Ankara Public Prosecutor's Office estimates.

Following the attack, Turkish Prime Minister Ahmet Davutoglu suggested the suspected suicide attacks outside a central train station during a pro-Kurdish peace rally might have been carried out by either the Kurdistan Workers’ Party (PKK) or the Islamic State jihadist group.