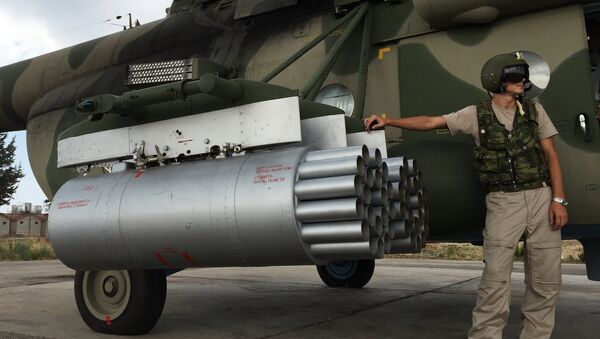 © Sputnik / Dmitriy Vinogradov
/
Go to the photo bank
Subscribe
The United States is bashing Russia for its efforts to eliminate the terrorist threat in Syria because Moscow's success will expose limitations of America's power, a Spanish newspaper asserted.

"Russia's victory in its fight against the Islamic State will mean Washington's crushing defeat in front of everyone. … Everyone will know that Russia's Armed Forces are more effective that American troops. And most importantly, Russia will secure a footing in the Middle East," La Republica quoted Yaakov Kedmi, who once headed Israel's Nativ government agency, as saying.

Middle Eastern states, according to the media outlet, will draw their own conclusions in the weeks and months to come, with some opting for new partnerships.

In late September, Russia launched a multinational aerial campaign meant to assist Damascus-led forces in their fight against extremists from the Islamic State, al-Nusra Front and other groups, who are trying to overthrow Syria's legitimate leader Bashar al-Assad.

Naming Names: 'Non-ISIL' Actually Means 'Al-Qaeda' in Syria
Moscow's efforts have so far been hailed as a success in Syria and in some countries across the Middle East. Some say that Russia has been able to achieve what the US failed to deliver after a months-long bombing campaign, which has not been authorized by the Syrian government.

The second component of Washington's approach to solving the months-long Syrian crisis has also yielded no results.

The La Razón newspaper maintains that the US will continue to supply weapons to opposition groups in Syria even after admitting that their $500-million operation produced no more than five fighters out of a planned army of so-called moderate rebels willing to fight ISIL and Assad.

Islamic State
© Sputnik
000000
Popular comments
Not only that, the ridiculously excessive and desperate 24/7 anti-Russian hate-campaign in practically every western media, has the opposite effect. Russia dont need no PR firm, Russia doing the right thing by the book honestly and perfectly legal aside, the hysterical western governmental and corporate media campaign is the best PR-firm one could ever wish for.

Mikhas
18 October 2015, 12:14 GMT5
000000
mikhas, Reading actual statements of Lavrov and Putin (and not as reported in the extremely biased or outright partisan MSM) I am often impressed with the restrained language, the grasp of wider issues and diplomatic formulations. Contrast that with the silly disingenuous language of Obama, Kerry and Powers. Putin for instance is able and willing to directly answer questions even from actually pretty critical interviewers (like Charlie Rose) without relying to the teleprompter. Goes to show that an "Information War" is won by information and not by empty grandstanding propaganda.
JPH
18 October 2015, 14:57 GMT2
000000
Newsfeed
0
New firstOld first
loader
LIVE
Заголовок открываемого материала
Access to the chat has been blocked for violating the rules . You will be able to participate again through:∞. If you do not agree with the blocking, please use the feedback form
The discussion is closed. You can participate in the discussion within 24 hours after the publication of the article.
To participate in the discussion
log in or register
loader
Chats
Заголовок открываемого материала
Worldwide
InternationalEnglishEnglishMundoEspañolSpanish
Europe
DeutschlandDeutschGermanFranceFrançaisFrenchΕλλάδαΕλληνικάGreekItaliaItalianoItalianČeská republikaČeštinaCzechPolskaPolskiPolishСрбиjаСрпскиSerbianLatvijaLatviešuLatvianLietuvaLietuviųLithuanianMoldovaMoldoveneascăMoldavianБеларусьБеларускiBelarusian
Transcaucasia
ԱրմենիաՀայերենArmenianАҧсныАҧсышәалаAbkhazХуссар ИрыстонИронауОssetianსაქართველოქართულიGeorgianAzərbaycanАzərbaycancaAzerbaijani
Middle East
Sputnik عربيArabicArabicTürkiyeTürkçeTurkishSputnik ایرانPersianPersianSputnik افغانستانDariDari
Central Asia
ҚазақстанҚазақ тіліKazakhКыргызстанКыргызчаKyrgyzOʻzbekistonЎзбекчаUzbekТоҷикистонТоҷикӣTajik
East & Southeast Asia
Việt NamTiếng ViệtVietnamese日本日本語Japanese俄罗斯卫星通讯社中文（简体）Chinese (simplified)俄罗斯卫星通讯社中文（繁体）Chinese (traditional)
South America
BrasilPortuguêsPortuguese
NewsfeedBreaking
04:36 GMTCanadian Opposition Conservatives Leader Concedes Defeat in Election
04:26 GMTLive Updates: India Reports 26,115 New COVID-19 Cases
04:25 GMTCanada’s Liberals Lead in 157 Districts With 70% of Polls Reporting, Elections Commission Says
03:50 GMTGuterres Urges US, China to Rebuild Their Relationship to Avoid New Cold War - Report
03:42 GMTPhoto: Bolsonaro Forced to Eat Pizza on NYC Sidewalk Because He Is Not Vaccinated
03:31 GMTCanada's Liberals to Win Most Seats in 2021 Federal Election, Projections Claim
03:15 GMTUnited Russia Party Wins State Duma Elections With 49.82% of Votes
02:55 GMT911 Call Reveals Boyfriend Was Seen 'Slapping' Petito Two Weeks Before Her Disappearance - Report
02:31 GMTBiden Reaffirms Strong US-UN Partnership at Meeting With Guterres
02:22 GMTIndia Cuts Off Communications, Internet in Kashmir Due to Terrorists, Reports Say
02:12 GMTMember of CIA Chief’s Team Affected by ‘Havana Syndrome’ During Work Trip to India, Report Says
01:22 GMTClimate Change-Driven Cyclones Could be Regular Sights in Europe in 30-50 Years, Meteorologist Warns
01:02 GMT‘License to Murder Children?’ Psaki Panned for Bringing Up Biden’s Losses in Kabul Strike Answer
00:38 GMTMilley Told Admiral to Halt Operations in Pacific That China Could Deem 'Provocative', Authors Claim
00:11 GMTPremier League Goals of the Weekend
YesterdayMali Looks for ‘Plan B’ to ‘Bolster Our National Defense’ As French Mission Exits, Leaving Chaos
YesterdayGlobal Pandemic Caused Significant Surge in Demand For Black Bridal Dressers, Fashion Experts Say
YesterdayCoronavirus Death Toll Surpasses 1918 Influenza to Become Deadliest Pandemic in US History
YesterdayIran's New Defense Minister Says Enemies Will Get 'Crushing Response' - Report
YesterdayBorrell Expresses Regrets That EU Countries Were Not Invited to Join AUKUS