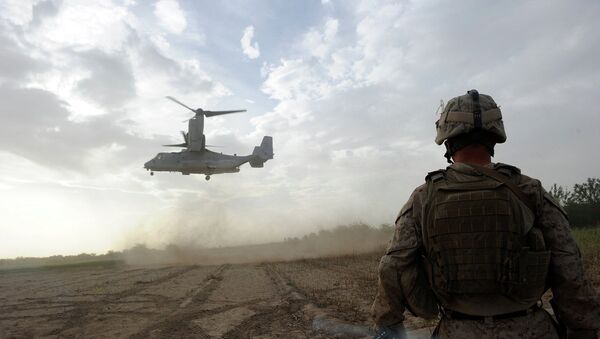 The US has decided to prolong its military mission in Afghanistan. The latest move is a deviation from the original plan to pull out all but a small, embassy-based US military presence by the end of next year.

Under the new plan 5,500 US troops will remain in the Islamic Republic when President Obama leaves office in 2017.

Obama to Announce US Troops to Remain in Afghanistan After 2016
Barack Obama said that the changes in plan were made due to the deteriorating situation in Afghanistan.

America’s combat mission in Afghanistan started in 2001 after the attack on the World Trade Center. The 14-year-old conflict became the longest war in the US history. It resulted in the elimination of the Taliban militant group from power in Afghanistan.

In 2014, Washington ended its combat mission and since then Afghan forces have been in charge of the country’s security. The Taliban has recently stepped up its activity. In September they seized the city of Kunduz, which became its largest territorial gain in 14 years.

Expert in Middle East politics and affairs Dr Alon Ben-Meir spoke to Sputnik in an exclusive interview regarding the US’ new plan in Afghanistan.

“I am not sure what mission it’s going to be. What is the mission? If it is some sort of negotiation with the Taliban then we should be sitting and making such a negotiation. I am reminded by the situation in Vietnam; we were fighting there a lost war from the very beginning. Similarly, I personally don’t think that the Taliban can be defeated now or in five or ten years. They are indigenous people who have been living there for thousands of years and they will continue to live there.”

Ban-Meir further added, “For the US to go there and try to change their political dynamic and introduce democracy is a false assumption. The time has come for the US to reconsider its strategy in Afghanistan.”

He went on to say that he finds it really baffling that after nearly 12 years of fighting the US is still ‘training’ the Afghani forces. He stressed that he would like to know what this mission is all about and how the US plans to deal with it.

“Those who have interest in continuing the war will continue to preach for it but I think they are operating on baseless grounds,” Ban-Meir told Sputnik.

Taliban Islamic Movement Controls Up to 70% of Afghanistan
He further spoke about how ISIL is recruiting Muslims from different countries and not just the Taliban. So according to the expert the focus should be on eliminating ISIL forces. “We are not going to be able to defeat ISIL without significant ground troops. If we eliminate ISIL then we don’t have to worry about them recruiting Taliban and other Muslims from other Arab states.”

Ban-Meri said that so far the US has no comprehensive strategy and it is not employing proper means either political or military to reach any kind of conclusion.

“The Taliban will take over the country once the US leaves. So we need to make a sustainable political solution which will be equitable. We cannot force the Taliban to change their life style; we cannot do that even with half a million troops. It is their life, they are indigenous people and they have been living like this for centuries. We have no business going there and changing their lives.”

The expert added that the US should eliminate extremism and terrorism and it is doing that all over the world and Afghanistan should not be an exception.