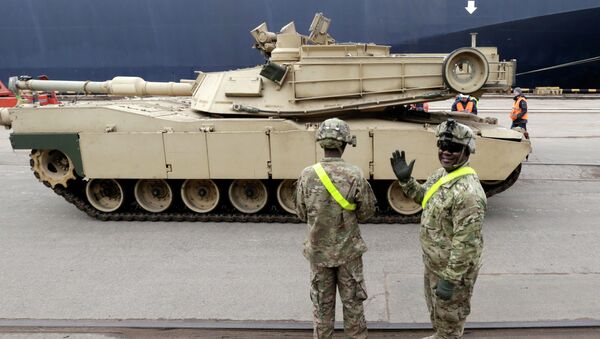 © REUTERS / Ints Kalnins
Subscribe
International
India
Africa
Washington, London and Berlin are fighting each other for the leading role in the Baltics. However, their enthusiasm has little to do with providing military protection, but serves their national interests, RIA Novosti commentator Mikhail Sheinkman explained.

The Baltic States should be quite proud of themselves, as many as three Western capitals are currently seeking military partnerships with them. Berlin, Washington and London all want to protect the Baltic States from war and Russian "aggression," but there is something else that drives the three Western leaders into the region that has little to do with the Russians and everything with self-centered national interests in the United States, Britain and Germany.

The fear of war is a valuable commodity, perhaps as useful and profitable for some as war itself. The United States, Britain and Germany can't decide who will lead NATO operations in the Baltics. The three countries are eager to "help" the Baltics so much that a friction is starting to appear among them.

The Baltic States screaming that they need military protection to counter potential Russian "aggression," but knowing the peaceful nature in the area Washington, London and Berlin are all vying to be the leading force in the Baltics.

Protection of the Baltic States is a safe haven. First of all, regardless of what the governments of the Baltic States say about Russian "aggression," NATO commanders understand that it's a myth and therefore it's much better to prove their solidarity in Estonia or Latvia than on a real battlefield.

West Helps Baltic States… by Providing Cleaning Jobs at NATO Bases
Second, by providing "protection," London and Berlin could then possibly send refugees to the Baltics. The locals of course will be against it, but no refugees would mean no protection.

And thirdly, a presence in the Baltics is a great opportunity for the United States, Britain and Germany to make the full use of their aging military hardware. The leaders of the Baltics won't complain even if Western military equipment is past its best, as shown by a Germany's Typhoon fighter jet, which managed to lose its external fuel tank on a runway in Estonia.

How will the divide of the Baltics end? All three Western leaders have their interests in the region. Perhaps each will get to have its own country, after all, there are the three Baltic States.