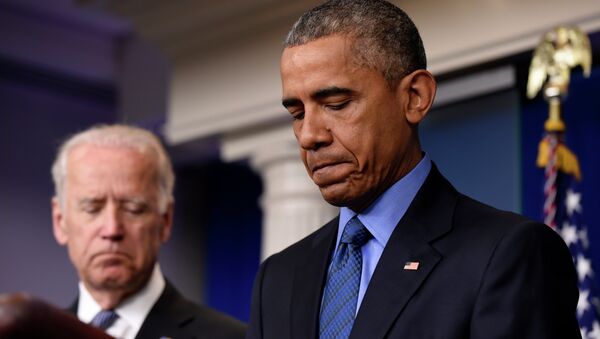 Some of the US’s major allies appear more and more convinced that Barack Obama is losing his political influence on the Syrian conflict and the fight against the self-proclaimed Islamic State terror group, according to an analysis in the US media.

Key US partners are increasingly fixing their eyes on Moscow rather than Washington, writes Dan de Luce, a columnist for Foreign Policy.

US War in Syria, Iraq Part of Bigger Plan Aimed Against Iran and Beyond
According to de Luce, the recent visit of Saudi Arabia’s defense minister Mohammed bin Salman to the Russian city of Sochi showcases on the one hand to what extent the “power dynamics” in the Middle East has changed, and on the other — that, in US allies’ eyes, President Putin is close to taking Barack Obama’s place of “regional kingmaker.” The author pointed out that high-profile representatives of Saudi Arabia and other Gulf countries are now “knocking on Putin’s door instead of that of the Oval Office.”

The visit of the Saudi minister, de Luce noted, suggests Riyadh is looking into the opportunity of an agreement under which Syrian president Bashar al-Assad would stay in power for a longer period of time in exchange for the creation of Russian-Saudi joint forces in the fight against IS.

“If the Saudi visit was coordinated with the US, that would be one thing, but if it wasn’t, it was the Saudis again saying to us, ‘You’re irrelevant,’” FP quoted former US ambassador to Syria Ryan Crocker as saying.

Battle Against ISIL: Russia Exposes US Lies in Syria
The US’ key allies, alarmed by the recent Iran nuclear agreement between Tehran and the P5+1 powers, seem to be arriving at the conclusion that Obama is losing his significance and influence in terms of the Syrian war and fight with IS.

Despite the fact that the US maintains long-term alliances in the Middle East and has huge military and economic might, some of their partners are seeking reassurance amid ongoing events in Syria, and are probing into Moscow-proposed initiatives.

For instance, the visit of the Saudi defense minister to Russia coincided with that of a senior military representative from the United Arab Emirates, Abu Dhabi’s Crown Prince Mohammed bin Zayed Al Nahyan, de Luce added.

Another crucial regional ally of the US, Egypt, is also attempting to improve relations with Moscow. The country’s leader Abdel Fattah al-Sisi has four times visited Russia since coming to power in 2013, and has also invited Putin to Cairo once. At the same time, the Egyptian president has made only two trips to the US, and was supposed to be hosted at the White House only once.

The Phantom of Syria: Does ‘Moderate’ Syrian Opposition Really Exist?
Israel has also joined the list of those “knocking on Putin’s door,” de Luce noted, referring to the late-September meeting of president Putin with Israeli prime minister Benjamin Netanyahu.

The White House, in its turn, has hopes that Russia will stumble in Syria. Vali Nasr, a former senior State Department official, argued that if Moscow achieves its objective and transforms its wins on the battlefield to a political resolution of the war, it will eventually “translate into much more regional influence [for Russia] in the Middle East.”

“And also many other countries in other regions of the world may come to the conclusion that it’s not America that’s the indispensable nation,” he concluded.