Dozens of Terrorists Killed by Syrian Army in Latakia Province 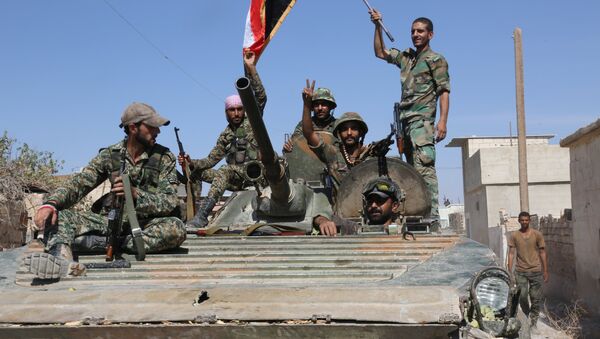 "As a result of the offensive, we have established control over the towns of Job al-Ahmar, Rabia, and Salma. A total of 34 terrorists, most of them foreign nationals including Chechens, Turks, and Tunisians, have been eliminated," brigade general Ali Maihoub said.

"In the morning of October 15, parts of our armed forces began a military operation in the north of the Homs province… The names of field commanders killed here are known: Omar Al Khadr, Khalid Abu Anas and Abu Bakr al-Shishani," he went on to say. The latter two are of Chechen origin.

“Our forces […] have managed to seize partial control of the villages of Ter-Maalya, Jawalik, Sunaysil, and also encircled the village of Dar al-Kabira,” Maihoub added.

Death From Above! Russian Air Force Smashes ISIL Forces in Syria
According to the Syrian army spokesamn, air strikes killed and injured dozens of Islamic State militants east of the Deir ez-Zor Airport.

"In the eastern Raqqa province about 30 ISIL militants have been killed", Ali Maihoub said.

Earlier on Friday, Colonel-General Andrei Kartapolov, head of the Main Operations Directorate of the Russian General Staff, told journalists during a briefing that the large-scale Syrian offensive was enabled by the Russian air operation.