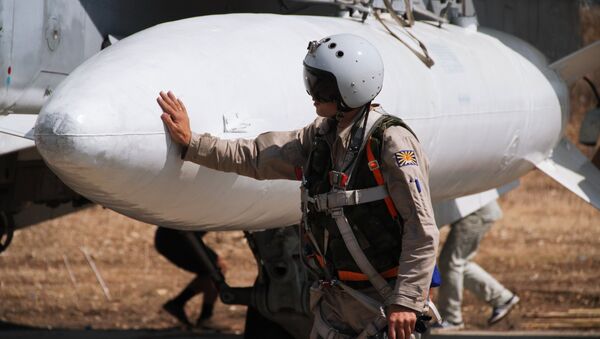 © Sputnik / Dmitriy Vinogradov
/
Go to the photo bank
Subscribe
Russian and Syrian high-ranking officials discussed the need to unite their efforts to combat terrorist groups in the Syrian Republic.

"During the conversation the sides exchanged views on the situation in Syria, with the emphasis on the need to consolidate the international, regional and intra-Syrian efforts to combat terrorist groups in the Syrian Republic, in the interests of settling the Syrian crisis politically as soon as possible," the statement said.

According to the Foreign Ministry, Bogdanov met with members of the Syrian Social Nationalist Party delegation headed by its Head of External Affairs Hassan Sakr.

During the meeting with Sakr, Bogdanov stressed the need for combined international efforts to counter the "dangerous hotbed of terrorism" in Syria. The Russian diplomat called for an intra-Syrian political dialogue based on the 2012 Geneva communique.

Russian Warplanes Have Destroyed 456 ISIL Targets in Syria Since Sept. 30
Syria has been mired in a civil war since 2011, as Syrian government forces fight opposition factions and extremist groups, including the Islamic State and the Nusra Front.

Russia’s Sukhoi Su-25, Su-24M and Su-34 attack aircraft, with the support of Su-30 jets, launched precision airstrikes against the IS targets in Syria on September 30, following a request from Syrian President Bashar Assad.

Additionally, Russia has been sharing intelligence with Iraq, Syria and Iran through the Baghdad Information Center in the Iraqi capital.

Moscow has been promoting a political settlement in Syria, having hosted two rounds of intra-Syrian talks between representatives of the Syrian government and the country's opposition in 2015.