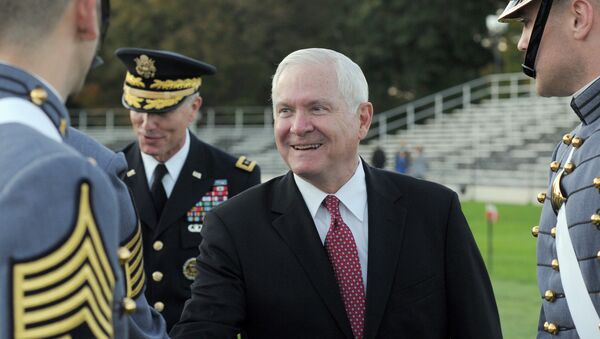 © AP Photo / Lee Ferris
Subscribe
More and more US officials are coming out against the Obama administration’s Syria policy. Former defense secretary Robert Gates has been gone so far as to call it "nuts."

Prior to Russia’s anti-terror campaign in Syria, Obama was the man with the $500 million plan. That’s how much the Pentagon set aside to train and equip so-called "moderate" Syrian rebels.

It was an overt failure from the start. With sights originally set on creating an army of 5,000 fighters, the program currently has fewer than ten.

That embarrassing lack of success has led to the program’s suspension, and the Obama administration is facing harsh criticism for its lack of foresight.

"I think the idea of training somebody from the outside and sending them in is nuts, it’s just not going to work," former US defense secretary Robert Gates told Fox News on Thursday.

And Gates should know. A former CIA director, he also led the Pentagon throughout both the Obama and Bush administrations.

During the interview, Gates also criticized President Obama for alienating the US military.

"I think there were people in the White House, and I don’t want to name any names, who were constantly goading him," Gates said, adding that those unnamed individuals were telling the president that "the military is trying to box you in."

During the train and equip program’s existence, the Pentagon had well-documented trouble trying to identify "moderate" rebels. Training less than 100, most of those fled after coming under attack from the al-Nusra Front.

Others handed over massive amounts of equipment to the al-Qaeda affiliate, including vehicles.

Despite the program’s failure, Washington is pushing forward with plans to arm rebels in the war-torn country. On Monday, the Pentagon airdropped nearly 50 tons of ammunition into Syria. It was only later that US officials admitted to having no real idea of where those supplies would end up.

"So while these forces, we do ask them, we want them to fight [IS] – I’m not prepared to talk about requirements or restrictions or pledges or anything like that," Colonel Steve Warren, a Pentagon spokesman, told reporters on Tuesday.

Russia’s anti-terror campaign, however, is proving remarkably successful. Since airstrikes began on September 30, Russian warplanes have destroyed 456 targets of the self-proclaimed Islamic State terrorist group, according to the Russian General Staff.

"Most armed formations are demoralized," Colonel-General Andrei Kartapolov, head of the Main Operations Directorate of the Russian General Staff, told reporters on Friday.

"There is growing discontent with field commanders, and there is evidence of disobedience. Desertion is becoming widespread."

000000
Popular comments
"Nuts" is an understatement. A lot of people may not be aware of this, or they haven't connected the dots yet, but all those years when people were branded as conspiracy theorists, especially where 9/11 is concerned, are now a step closer to being vindicated. And what a big step it is! It proves, here for all the see, that The Establishment really is capable of doing these things. They are not above executing horrible, devious schemes in order to advance their agendas.

Robert
17 October 2015, 02:15 GMT3
000000
Newsfeed
0
New firstOld first
loader
LIVE
Заголовок открываемого материала
Access to the chat has been blocked for violating the rules . You will be able to participate again through:∞. If you do not agree with the blocking, please use the feedback form
The discussion is closed. You can participate in the discussion within 24 hours after the publication of the article.
To participate in the discussion
log in or register
loader
Chats
Заголовок открываемого материала
Worldwide
InternationalEnglishEnglishMundoEspañolSpanish
Europe
DeutschlandDeutschGermanFranceFrançaisFrenchΕλλάδαΕλληνικάGreekItaliaItalianoItalianČeská republikaČeštinaCzechPolskaPolskiPolishСрбиjаСрпскиSerbianLatvijaLatviešuLatvianLietuvaLietuviųLithuanianMoldovaMoldoveneascăMoldavianБеларусьБеларускiBelarusian
Transcaucasia
ԱրմենիաՀայերենArmenianАҧсныАҧсышәалаAbkhazХуссар ИрыстонИронауОssetianსაქართველოქართულიGeorgianAzərbaycanАzərbaycancaAzerbaijani
Middle East
Sputnik عربيArabicArabicTürkiyeTürkçeTurkishSputnik ایرانPersianPersianSputnik افغانستانDariDari
Central Asia
ҚазақстанҚазақ тіліKazakhКыргызстанКыргызчаKyrgyzOʻzbekistonЎзбекчаUzbekТоҷикистонТоҷикӣTajik
East & Southeast Asia
Việt NamTiếng ViệtVietnamese日本日本語Japanese俄罗斯卫星通讯社中文（简体）Chinese (simplified)俄罗斯卫星通讯社中文（繁体）Chinese (traditional)
South America
BrasilPortuguêsPortuguese
NewsfeedBreaking
07:48 GMT'Impossible': Baghdad Politician Explains Why Iraq and Israel Are Nowhere Close to Normalising Ties
07:46 GMTR. Kelly's Negative Net Worth Grabs Attention on Twitter: 'How He's Gonna Pay the Lawyers?'
07:24 GMTMacron: Greece to Buy Rafale Jets, Three Frigates From France in Deal 'Boosting EU's Independence'
06:54 GMTHikers Find Live Nazi Grenade From World War II Near Swedish Ski Resort
06:48 GMTScania Scandal: Swedish Carmaker Investigated for Bribery Over Deal With Indian Minister
06:37 GMT25 Injured After Explosion in Residential Building in Gothenburg, Sweden, Reports Say
06:13 GMTGerman Chancellor Candidates in Focus as Tough Coalition Talks Loom
05:53 GMTBrexit to Blame: Germany's Olaf Scholz Says 'End to Freedom of Movement' Fueled UK Petrol Crisis
05:37 GMTUK Motorist Runs Over 'Knife-Wielding' Man Amid Alleged Petrol Dispute - Video
05:23 GMTPatriarchy Strikes Back? Iceland's Historic Female-Majority Parliament Up in Smoke After Recount
04:43 GMTUS Marine Colonel Put in Brig For ‘Asking for Accountability’ Over US Departure From Afghanistan
04:03 GMTWitness Who Claims She Saw Prince Andrew Dancing With Giuffre at Club to Testify in Court - Report
03:24 GMTBennett Claims He Said 'No Three Times’ to President Biden During Their August Meeting
03:16 GMTRepublicans Slam DHS Chief Mayorkas for Allowing Thousands of Haitians Into US
01:37 GMTUS ‘Humiliated Like Never Before’, Trump Says, After DHS Allowed Thousands of Migrants to Pour in
01:31 GMTLockheed Martin to Build US Army’s Next Generation Tactical Vehicle Based System
01:10 GMTBorder Patrol Agents Disgruntled Over Biden's Attempts to Throw Them 'Under the Bus' - Report
00:53 GMTBeard-Check: Afghan Barbers Banned From Shaving, Trimming Beards - Reports
00:27 GMTR. Kelly Found Guilty: Will Artist Be Removed From Music Services?
00:03 GMTIs Sir Alex Ferguson Right, That Ronaldo, and not Messi, Could Score a Hat-trick for Anyone?