Motherland Calling: Russians More Resistant Than Ever to Emigration 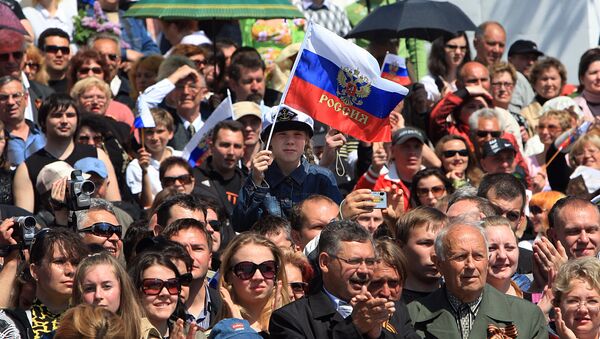 Recent polling by the Levada Center, an independent sociological research firm, has found that the number of Russians looking to emigrate abroad has dropped to historic lows. Sputnik investigates.

Levada's findings, based on polling carried out late last month among 800 people across 46 Russian regions, showed that only 6% of Russians 'definitely' want to emigrate abroad, with another 5% answering that they would 'probably' like to do so. This compares favorably with the Center's polling from 2011, when a full 18% of Russians answered that they would either 'definitely' or 'probably' like to immigrate.

Frosty Ties: Poll Shows Russians Still Wary of US, But Less Than Last Year
These results are significant, shedding some light on Russians' psychology, and helping to explain their motivations. They also seem to indicate that the wave of patriotism resulting from the 'Crimean Spring' and the events which followed has consolidated among the majority of Russians the idea that their fate is indelibly tied with their home country.

The consolidation of such attitudes clashes dramatically with the outlook many Russians had throughout the 1990s and much of the first decade of the 21st century, when, in the midst of economic collapse (in the 90s) and political apathy (in the 2000s), people were strongly tempted by the allure of material wealth and social stability promised by life abroad, particularly in Western Europe and North America.

More Patriotic, but Still Open to the Outside World

Despite showing that a vast majority of Russians do not want to permanently emigrate abroad, Levada's  polling also indicated that by no means do Russians want to be closed off from the outside world or from 'Western civilization'. Over one in five, or 21% of respondents noted that they would 'definitely' or 'probably' consider working abroad (compared with 28% in 2011), with 16% answering that they would 'definitely' or 'probably' consider studying abroad (compared with 17% in 2011).

Polling Shows Growing Trust Toward Russia's State & Social Institutions
At the same time, despite Russians' obvious respect for the West and Western civilization, as demonstrated by their thoughts on working and studying abroad (and more broadly by their appreciation for things like Western cultural production and consumer goods), Levada's polling also found that Russians generally do not consider their value system and self-identity to align with Western culture. The survey showed that only 2% 'feel this way at all times', with 10% saying 'it's fairly important' to them. In contrast, an overwhelming majority of respondents, 81%, said either that 'this is not very important to me', or that 'I don't feel this way at all'.

Detailed results from Levada's polling can be found here.