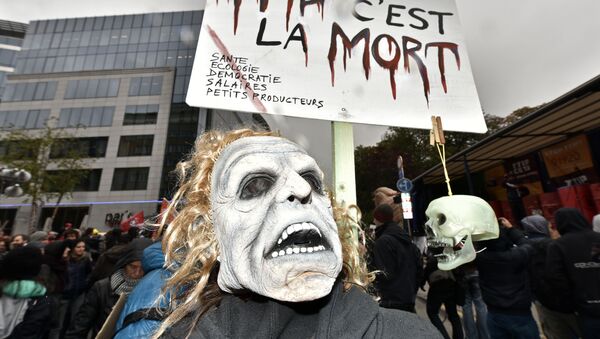 European Union Trade Commissioner, Cecilia Malmström has admitted "I do not take my mandate from the European people" over the secretive talks on the Transatlantic Trade and Investment Partnership (TTIP) trade deal, Sputnik has been told.

There has been huge criticism of the TTIP trade deal between the European Union and the US. Critics, however, say the deal set to be the biggest in the world will hand huge powers to multinational companies and will lead to looser regulation and potentially, allow big business to take legal action against governments that outlaw certain products or services.

Looking forward to discuss the new trade strategy with @EP_Trade this morning.

According to John Hilary, Executive Director at War on Want, the person leading the talks, Cecilia Malmström, is being heavily influenced by corporate lobbyists. Hilary told Sputnik:

"I challenged Malmström over the huge opposition to TTIP across Europe. In the last year, a record three and a quarter million European citizens have signed the petition against it."

"Thousands of meetings and protests have been held across all 28 EU member states, including a spectacular 250,000-strong demonstration in Berlin this weekend.

"When put to her, Malmström acknowledged that a trade deal has never inspired such passionate and widespread opposition. Yet when I asked the trade commissioner how she could continue her persistent promotion of the deal in the face of such massive public opposition, her response came back icy cold: 'I do not take my mandate from the European people.' "

He said Malmström receives her orders "directly from the corporate lobbyists that swarm around Brussels.

"The European Commission makes no secret of the fact that it takes its steer from industry lobbies such as BusinessEurope and the European Services Forum, much as a secretary takes down dictation."

"It's no wonder that the TTIP negotiations are set to serve corporate interests rather than public needs."

The EU and the US already trade goods and services worth US$2.3 billion (€2bn) every day, but the TTIP would create further growth and new opportunities by eliminating red tape and tariffs wherever possible to reduce costs and open up new markets.

However, critics say the TTIP will pave the way for huge multinationals to have more controlling powers than governments. Central to the talks is the issue of investor-state dispute settlement, or a version of it, that gives shareholders the power to sue governments if regulatory issues cause financial harm to a company.

According to the Gala Foundation, the TTIP's regulatory harmonizations will ignite a "race to the bottom" of environmental regulations in the EU, so that they come to resemble the USA's far weaker regulatory system.

Many analysts agree that TTIP is a Trojan horse for big food corporations aiming to avoid food safety regulations and undermine sustainable agricultural practices in their rush for profits and trade.

"TTIP offers a glimpse of the nightmare that the European Commission has in store for each one of us."

"Cecilia Malmström has shown the contempt with which she and her fellow commissioners view the European people. We have been warned," said Hilary.