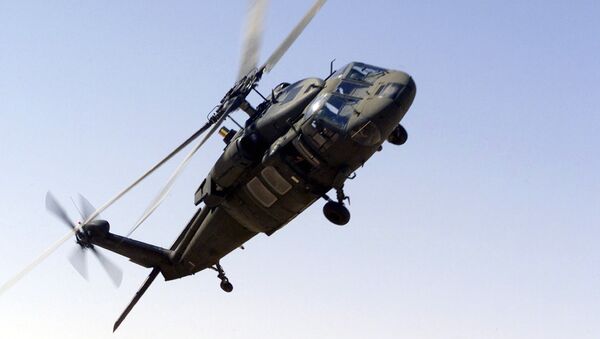 © AFP 2023 / SSGT Sean M. Worrell / USAF / DOD
Subscribe
International
India
Africa
The US is all set for a new special delivery for Riyadh. The Saudis are awaiting a fresh shipment of Black Hawk helicopters, packed with heavy weapons. The move flies in the face of international calls on Western powers to halt weapons deliveries to the Saudis, whose airstrikes continue to pound Yemen further into humanitarian crisis.

Twenty M240H machine guns and additional equipment is listed in the contract as well.

The sale requires up to sixty US government and contractor personnel to travel to Saudi Arabia for up to sixty months for the equipment follow-up. Riyadh received 72 Black Hawks in 2010, alongside dozens of Apaches and other helicopters, F-15SA strike fighters and various other military equipment.

The US has been selling Black Hawks extensively over the last two years to countries including Jordan, Tunisia, Austria, Slovakia, Mexico and Brazil.

“The proposed sale will make a positive contribution to the foreign policy and national security objectives of the United States by helping to improve the security of an important regional partner that has been, and continues to be, a significant US partner for political stability and economic progress in the Middle East,” the announcement on the DSCA website published Wednesday states.

Dozens Dead in Yemen Wedding Airstrike, Witnesses Blame Saudi-Led Coalition
Earlier this month, Amnesty International issued a report calling on Washington and London to halt arms deliveries to Saudi Arabia in light of the hundreds of civilians killed and injured in an ongoing air campaign launched by a Saudi-led coalition in Yemen against Shiite Houthi rebels in March.

According to the United Nations, hundreds of civilians have been killed in Yemen in the course of the conflict and around 80 percent of the country’s population is currently in need of urgent humanitarian assistance.

"Let me be clear: There is no military solution to this conflict" #UNSG Ban Ki-moon on crisis in Yemen @OSESGY @UN_DPA @Refugees @WFP