The Conquistadors Were Sickly, Not Beastly – Spanish Press 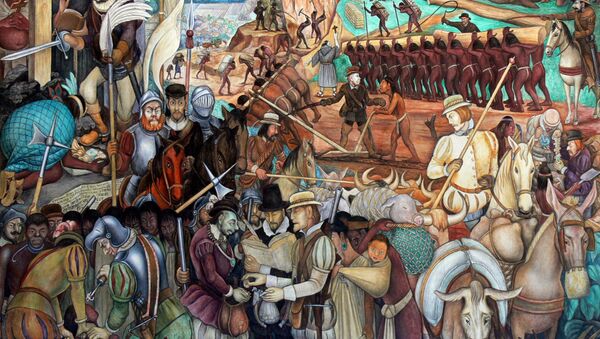 An article published in the Spanish newspaper ABC sheds light on some of the myths surrounding Spain's conquest of the New World.

The widely-held belief that the actions of Spanish conquistadors during their conquest of the New World led to the decimation of the indigenous population is a consequence of attempts to blacken the reputation of Spain and Spaniards, and is an exaggeration of the truth, Spanish journalist Cesar Cervera wrote on Wednesday.

"The anachronistic term 'genocide of American Indians' is one of the cornerstones of the 'Black Legend' disseminated by enemies of the Spanish Empire to undermine its prestige," writes Cervera in the article, published in the Spanish newspaper ABC.

"Among the lies, inflated figures and fictional events, the myth that the Spaniards committed planned massacres lives to this day. The truth of this historic debate shows that though the Spaniards did not stint on cruelty in the implementation of its goals, the true genocide was caused by disease, imported by Europeans."

Cervera does not dispute the demographic catastrophe which befell the New World after it was discovered by Christopher Columbus in 1492; however, he does dispute the population of the Americas prior to the conquest, which was traditionally thought to have numbered between 40 and 100 million people.

Spanish Lawmakers Stage Walkout on King Felipe European Parliament Speech
According to a study carried out by Venezuelan researcher Angel Rosenblat, the population was no more than 13 million people, and concentrated in large groups residing in the Aztec and Inca empires, within the territory of today's Mexico and Peru.

Even the common cold was fatal for many Native Americans, writes Cervera, let alone various epidemics. Smallpox wiped out almost the whole population of Santo Domingo in 1518-1519 after it was brought there by conquistadors led by Hernan Cortes, who then took the disease to Guatemala, where it killed half the population.

"The arrival of Francisco Pizarro in Peru dealt the last blow to the Inca Empire, which was [left] in a state of collapse due to disease. The smallpox epidemic was followed by an epidemic of measles [1530-31], typhus [1546] and flu [1558]. Diphtheria, mumps, syphilis, and pneumonic plague also hit the population hard."

According to research conducted by UCLA Geography Professor Jared Diamond, illness, rather than military conquest, led to the death of 95 percent of the population who lived in the Americas before 1492.

Syrian War Would Redefine Future of Global Economy – Spanish Media
The 'Black Legend' about the Spanish conquistadors was propagated by Dutch, English and French Huguenot writers wishing to undermine the prestige of the Spanish monarchy, which was the absolute ruler of the Americas for almost a century, writes Cervera.

The historians used the writings of friar Bartolome de Las Casas, who accompanied Columbus on his travels to the New World, and wanted to communicate what he saw as the contradictions between the aim of evangelizing the Indians, and the means used: of war, conquest, slavery, and mistreatment.

"The fact that the conquistadors were Spanish, was not the main factor," rather, the misguided means of spreading Christianity was de Las Casas' main target, says Cervera, who ended by quoting historian Joseph Perez, author of a book entitled, 'Black Legend.'

"European colonization of the XIX-XX centuries led to crimes analogous to those carried out by the Spanish conquistadors. The only difference is that for the Europeans there is no Las Casas, to tell everyone about the injustices."