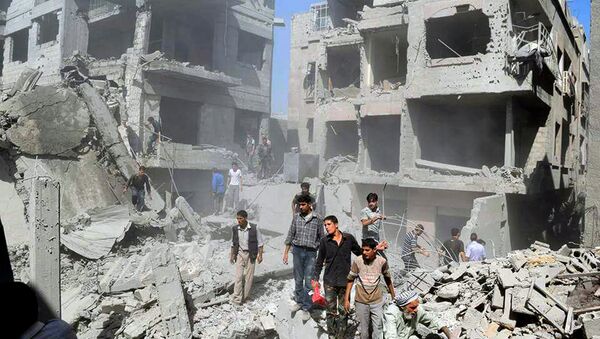 In mid-September, the All-Russian organization of veterans Combat Brotherhood and the Moscow branch of the Imperial Orthodox Palestine Society (IOPS) began collecting humanitarian aid for those displaced by Syria's four-year civil war, from individuals and various organizations.

"In a month, we have collected nearly 15 tonnes of cargo, in accordance with the announced list, which first of all [includes] long-term storage foods, medicines and warm clothes," spokeswoman for the Combat Brotherhood Nelly Kuskova told RIA Novosti.

She added that the aid cargo includes warm clothes for the Syrian military.

The first portion of aid, some 4 metric tons, is expected to be delivered to Syria on Monday, Kuskova said.

Russia Hands Over Humanitarian Aid to Syrian Government
Part of the aid will be sent to two schools located in Damascus, for children of Syrian military members who died in the war.

Syria has been in a state of civil war since 2011, with government forces fighting anti-government rebels as well as extremist groups, including the Islamic State.

Russia is among countries engaged in international efforts to find a political solution to the ongoing civil war in Syria, as well as providing humanitarian aid. UN estimates state over 250,000 have been killed and over 11 million have been displaced in the war.

On September 30, Russia launched precision airstrikes against IS positions in Syria on President Bashar Assad's request.