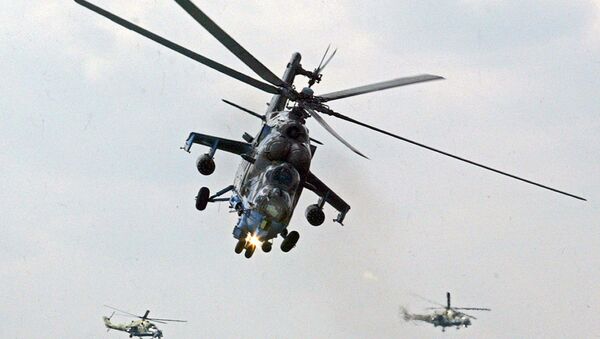 Also known as Hind helicopters, the Mi-24 is capable of traveling up to 186 miles per hour at incredibly low altitudes. Skimming the treetops, the gunships come equipped with 30mm guns and rocket launchers, and can transport troops.

It’s an impressive piece of hardware with no real equal in the world.

Still, a good helicopter is nothing without a good crew, and after observing the effects of Mi-24 strikes in Syria, US military analysts have been thoroughly impressed by both.

"When you see higher quality airmanship and precision fires coming from helicopters, that’s 100 percent Russian pilots," Christopher Harmer, a US Navy veteran who now works for the Institute for the Study of War, told Foreign Policy.

Part of that awe stems from the fact that the Mi-24 essentially does the job of two US helicopters. The Russian gunship combines the best qualities of the American Apache attack helicopter with the Huey transport helicopter.

The Pentagon lacks any kind of comparable aircraft.

The Mi-24 is also unlike anything in the Syrian arsenal, and Harmer suggests that the skill of Russian crews is "a qualitative technical advantage that the Syrian military just doesn’t have; it’s going to significantly reduce Assad’s casualties."

On Wednesday, the Russian Defense Ministry reported that 41 additional sorties had been carried out, destroying 40 IS facilities.

"Su-24M bombers carried out precision strikes near the city of Aleppo against facilities used by militants to assemble explosion devices and install them on suicide bombers’ automobiles," ministry spokesman Igor Konashenkov told reporters.

"Near the settlement of Hraytan, a Su-25M [Frogfoot] attack fighter carried out a strike against an IS terrorist arms depot and fuel storage unit," he added. "The facilities were completely destroyed using precision air strikes."

At the request of the legitimate government of Syrian President Bashar al-Assad, Russian airstrikes have been successfully combating IS since September 30.

000000
Popular comments
Helicopters have more chances than planes to be targeted by the Stinger missiles that the US delivered to their ISIS through the Saudis. These pilots really have cojones