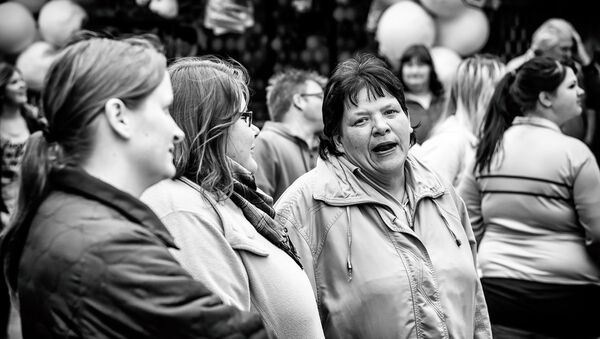 © Flickr / Mister G.C.
Subscribe
German Chancellor Angela Merkel is under pressure over the country's stance on the refugee crisis, with a new poll finding that a majority of Germans believe there are too many refugees in the country, while only a third agreed with Merkel's claim that Germany will be able to manage the situation.

Over 710,000 Migrants Arrive in EU in First 9 Months of 2015
The survey, carried out by YouGov, found that 56 percent of respondents thought there were already too many refugees in Germany and that the country couldn't handle taking in any more.

This represented a rise of 10 percent from the last poll in mid-September, indicating that many Germans were becoming increasingly frustrated with the government's approach to the crisis.

Officials say that Germany is expecting up to 800,000 asylum seekers this year, however it was recently reported that the figure could be as high as 1.5 million.

While aid agencies and humanitarian NGOs have praised Germany for opening its borders to those fleeing war in Syria and other parts of the Middle East, Merkel has been on the receiving end of criticism from members of the public and even members of her own ruling coalition, who argue that the decision to open up Germany's borders will hurt the country economically and socially.

Horst Seehofer, the governor of Bavaria, who is also a member of the ruling coalition's CSU party, has threatened to file a complaint against the chancellor in Germany's Federal Constitution Court, arguing that the refusal to set an upper limit on the number of refugees violates the constitutionally guaranteed independence of Germany's federal states.

On top of a backlash against the number of refugees allowed into Germany, there has also been a drop in confidence over Merkel's leadership.

The YouGov survey revealed that only 32 percent — less than one-third — of respondents agreed with the chancellor's repeated insistence that "we'll manage this" in relation to Germany's ability to handle the influx of refugees into the country.

Merkel has declared that she won't change the country's approach towards refugees fleeing combat zones in the Middle East, regardless of public opinion or criticism from within her own coalition.

However, some critics and commentators have noted that the pressure is building on the chancellor, especially with the YouGov poll revealing that 64 percent of people disagree with Merkel that Germany will be able to "manage" the impact of the crisis.

While many Germans have embraced the arrival of refugees from the Middle East and North Africa, others — including anti-Islam group Pegida — have protested against immigration into Germany.

There has also been an increase in violence towards some of Germany's new arrivals, with reports of assaults and arson attacks against some refugee hostels in the country.

000000
Popular comments
Well, I guess that means 1/3 of the Germans are either stupid or completely misinformed. Just kidding - the 1/3 are the senior citizens, they take a while to catch up. Merkels Reuninifation of Europe with Afrika borders on Genocide. Merkel is just as bad for Germany as she is for Russia or the EU. We survived Hitler, so I guess there is still hope...

Hagbard Celine
14 October 2015, 13:42 GMT1
000000
If we look back on Mrs. Merkel 10 years in office, there are not many thinks to be proud of !! Over the Refugee problems / Ukraine the government will fall !! We have to help people witch are in problems, but we can't help the whole WORLD if she think Germany can.. well then she is sick.
tobi.gelando
14 October 2015, 17:11 GMT
000000
Newsfeed
0
New firstOld first
loader
LIVE
Заголовок открываемого материала
Access to the chat has been blocked for violating the rules . You will be able to participate again through:∞. If you do not agree with the blocking, please use the feedback form
The discussion is closed. You can participate in the discussion within 24 hours after the publication of the article.
To participate in the discussion
log in or register
loader
Chats
Заголовок открываемого материала
Worldwide
InternationalEnglishEnglishMundoEspañolSpanish
Europe
DeutschlandDeutschGermanFranceFrançaisFrenchΕλλάδαΕλληνικάGreekItaliaItalianoItalianČeská republikaČeštinaCzechPolskaPolskiPolishСрбиjаСрпскиSerbianLatvijaLatviešuLatvianLietuvaLietuviųLithuanianMoldovaMoldoveneascăMoldavianБеларусьБеларускiBelarusian
Transcaucasia
ԱրմենիաՀայերենArmenianАҧсныАҧсышәалаAbkhazХуссар ИрыстонИронауОssetianსაქართველოქართულიGeorgianAzərbaycanАzərbaycancaAzerbaijani
Middle East
Sputnik عربيArabicArabicTürkiyeTürkçeTurkishSputnik ایرانPersianPersianSputnik افغانستانDariDari
Central Asia
ҚазақстанҚазақ тіліKazakhКыргызстанКыргызчаKyrgyzOʻzbekistonЎзбекчаUzbekТоҷикистонТоҷикӣTajik
East & Southeast Asia
Việt NamTiếng ViệtVietnamese日本日本語Japanese中国中文Chinese
South America
BrasilPortuguêsPortuguese
NewsfeedBreaking
18:39 GMTEx-DC National Guard Official Slams Testimonies of Pentagon Generals on 6 January as Absolute Lies
18:23 GMTDems Growing Increasingly Concerned by Midterm Prospects as Biden Polling Numbers Drop
18:21 GMTWhite House Confirms US Will Not Send Representation to 2022 Winter Olympics in Beijing
17:32 GMTKorean Treat and Eurovision Winner Among Most Mispronounced Words of 2021
17:24 GMTWhitehall Union Claims Victory After Court Dismisses its Case Against Johnson and Patel
17:14 GMTPope Francis Stumbles on Airstair as He Boards Plane in Greece - Video
17:02 GMTTrump’s Social Media Listing Vehicle Says Under Inquiry From US Securities Investigators
16:47 GMTRussia, Egypt Start Naval Phase of 'Bridge of Friendship-2021' Drills in Mediterranean
16:40 GMTUS Reportedly Mulls Cutting Russia Off SWIFT, Sanctioning Energy Producers & 'Putin's Inner Circle'
16:37 GMTFinland’s PM Parties at Nightclub Until 4am After Contact With COVID-Positive Official
16:14 GMTSecond Week of Ghislaine Maxwell Sex Scandal Trial Kicks Off
15:56 GMTBoost for Britain! Is the UK’s COVID-19 Third Jab Campaign Saving Lives?
15:55 GMTWestminster Preparing 10-Year War on Drugs in Attempt to Defeat County Line Gangs
15:44 GMTIsrael Will Reportedly Push US to Strike Iranian Facility Amid Lack of Progress in Vienna Talks
15:41 GMTAmerica Unveils First-Ever Strategy to Battle Corruption at Home and Abroad
15:30 GMTChina May Build Military Base in Equatorial Guinea Amid Beijing’s Tensions With Washington
15:15 GMTKremlin: Putin Will Listen to Biden's Proposals on Ukraine 'With Great Interest'
15:15 GMTNYC to Use 'Preemptive Strike' Against Omicron With Vaccine Mandate for all Businesses, Mayor Says
15:08 GMT3,000 Security Officers Guard India's Mathura as Hindu Group Threatens to Install Idol in Mosque
14:59 GMTAmid Rumours of US Boycott of Beijing Olympics, How Could the Move Affect the Games?