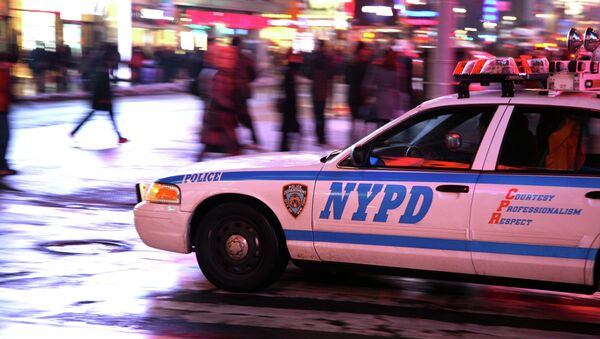 The New York Police Department’s (NYPD) violated law by surveillance program of Muslims, according to the decision of a US court.

NYPD Cop Pleads Guilty to Pulling a Gun on Kids, Loses 30 Vacation Days
NEW YORK (Sputnik) — A US court has reinstated a lawsuit against the New York Police Department’s (NYPD) controversial surveillance program of Muslims, the Center for Constitutional Rights (CCR) said in a statement on Tuesday.

"Today, the US Court of Appeals for the Third Circuit issued a comprehensive and stirring decision… recognizing the New York Muslims who have been subjected to the program of blanket, suspicion-less surveillance stated a valid claim of discrimination on the basis of their religion," CCR stated.

In February 2014, a US Judge ruled the surveillance program was constitutional, nearly two years after the media revealed its existence. The ruling stated the program was not instituted to discriminate against Muslims, but to identify terrorists hiding among law-abiding Muslims.

CCR appealed the ruling, ultimately getting the lawsuit reinstated.

"I am so pleased the court recognized our claim that the NYPD is violating our basic rights as Americans and were wrong to do so," lead plaintiff of the lawsuit Farhaj Hassan said in a statement.

NYPD Report Exposes Systemic Lack of Training on Excessive Force
He asserted no one should be spied on and treated like a suspect simply because of their faith.

"[T]oday’s ruling paves the path to holding the NYPD accountable for ripping up the Constitution," Hassan noted.

The monitoring included video surveillance of mosques, photographing license plates, community mapping and infiltration by undercover officers and informants of places of worship, student associations as well as businesses.

The CCR noted that while the NYPD has recently disbanded one of the main surveillance units, there is no evidence it has abandoned its practice of unlawfully profiling Muslims.

The CCR is a non-profit legal organization dedicated to advancing and protecting the right guaranteed by the Universal Declaration of Human Rights, according to the organization’s website.