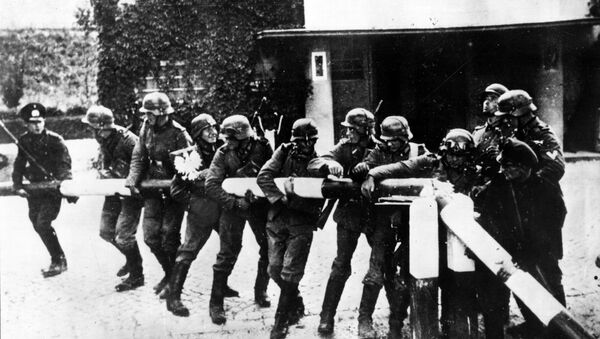 © AP Photo
Subscribe
A 16-year-old teen from the southern European Russian region of Astrakhan has been slapped with a 30,000 ruble fine (about $475 US) over a post on social media supporting the Nazi German invasion of Poland.

Diplomatic Row: 70 Years On, Poland & Russia Still at Odds Over WW2 History
Andrei Khegai, head of the Astrakhan Regional Court's press service, told RIA Novosti Tuesday that the court had fined the young man 30,000 rubles in connection with a criminal case opened against him earlier this year.

"The court's investigation found that the young man had made a post on social media featuring a photo of German soldiers from the World War II era. Under the photo, he made comments giving a positive evaluation of the events that took place September 1, 1939, namely the invasion of Poland by Germany, which have been recognized by an international tribunal to have been a crime," Khegai explained.

The criminal case against the teen was opened in May. The youth was charged under a new bill imposing criminal liability for public attempts to rehabilitate Nazism. The relevant amendments were made to the criminal code ahead of the 70th anniversary of the victory over Nazism. The law carries a maximum fine of up to 300,000 rubles or imprisonment for up to three years.

Poland Prepares to Demolish Remaining Soviet Monuments to WWII Liberation
Khegai emphasized that the youth, a student from Astrakhan's Ikryaninsky District, repented during the course of the investigation, with the court taking his admission of wrongdoing into account when reaching its verdict.

German forces attacked Poland on September 1, 1939. The fight for Warsaw lasted until September 28, after which the country faced four long years of occupation by Nazi Germany. The territories of western Ukraine and western Belarus captured by Poland during the Polish-Soviet War of 1919-1921 were absorbed by the Soviet Union. Tens of thousands of Poles and an estimated 600,000 Soviet soldiers lost their lives during the course of fighting to liberate Poland between 1944 and 1945.