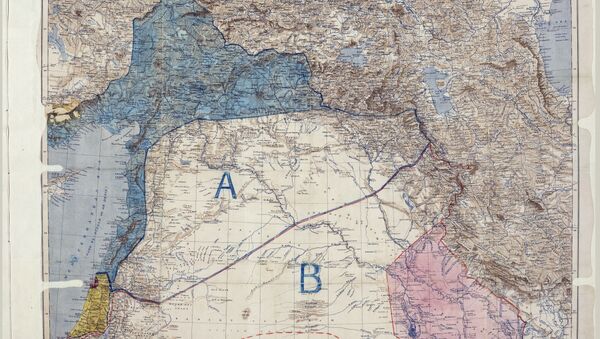 In a recent op-ed for Le Huffington Post, journalist and historian Dimitri Casali reflected on France's historical role in creating the crisis in the Middle East, commenting on the 'political autism' of contemporary Western leaders in their attempts to destroy the region's secular regimes.

France Protects al-Qaeda Affiliates, Should Help Russia Instead
"History can explain a great deal, including what is happening in Syria today," Casali notes. "The consequences of decisions taken at one point or another have a direct effect on our present situation, and influence our political choices. Together, Britain and France built the Middle East, and now we have destroyed it. It all began in Iraq, and continued in Libya and Syria, [the latter] with the dubious and shortsighted policy of our president, Francois Hollande."

The historian recalls that over the past two decades, "we have observed the destruction of the balance of power throughout the Middle East." The region's countries, he recalls, were created through "a reconfiguration conceived by us and our British friends following the collapse of the Ottoman Empire in 1918."

"Today," he notes, "everything has been put into question: borders, spheres of influence, leadership. It is worth remembering that the secretive Sykes-Picot agreements of 1916 in Paris and London were meant to split the entire Middle East into zones of influence. Then, at the San Remo conference in 1920, France and Britain gained mandates among the Arab states, created with artificial boundaries, divisions which often cut across geographical, human and cultural lines…If Daesh today seeks to destroy borders established by the French and the British, their aims flow out of these agreements."

Does the West Really Want to See Islamist Radicals Take Damascus?
Casali finds it fitting that today, nearly a century after the creation of the contemporary Middle East, "the Islamic State seeks to present itself as a force looking to 'correct' the history created by the colonial powers." He recounts the group's symbolic ceremonies to abolish the border between Iraq and Syria, and their idea to "call into question the legitimacy of the mandates of governments formed by the French and the British (Iraq, Syria, Lebanon, Jordan). Today, we are witnessing the emergence of a completely Sunni state. The Sunni fundamentalists' ambition is to go even further with their messianic movement, while Shiite Iran shows no desire for conquest."

The journalist points out that "in recent years, the political autism of Western countries has led to the weakening or even the collapse of regimes which had served as the barrier before the fundamentalists, through attacks on the Ba'ath Party regimes in Iraq and Syria, and the removal of Saddam Hussein in 2003. Rejecting to intervene in Iraq, by the way, was one of the few achievements of the era of President Jacques Chirac," the journalist writes.

Moreover, "in 2011, our historical understanding of the Arab-Muslim world was lost somewhere in the sands of Libya under Nicolas Sarkozy." Casali points to pressures from France's interventionist intellectuals, including Bernard-Henri Levy, a friend of Carla Bruni-Sarkozy, which "became the basis for the intervention aimed at overthrowing Gaddafi."

"The chaos generated by this intervention allowed fundamentalists from all across North Africa, including the Sahel, to get their hands on a considerable military arsenal, a windfall they could not have imagined even in their wildest dreams! Four years after the military intervention in Libya and Gaddafi's elimination, we are facing the following situation: chaos, civil war, the rise of Islamism and the drama of migrants. France and Britain have destroyed Libya, and the result of their intervention has been total chaos."

ISIL 'Frankenstein' Created by West and Its Gulf State Allies
Ultimately, the journalist warns that the danger of Daesh expanding to Libya and spreading throughout North Africa is a danger not only for the region, but for Europe as well.

"If ISIL succeeds in establishing a foothold in the Maghreb, it will soon make an attempt to encroach on the other side of the Mediterranean as well, because we are dealing with a messianic movement, whose goals include the conquest of Europe. Then the West will recall with nostalgia the Arab dictators, from Hussein to Gaddafi to Assad."