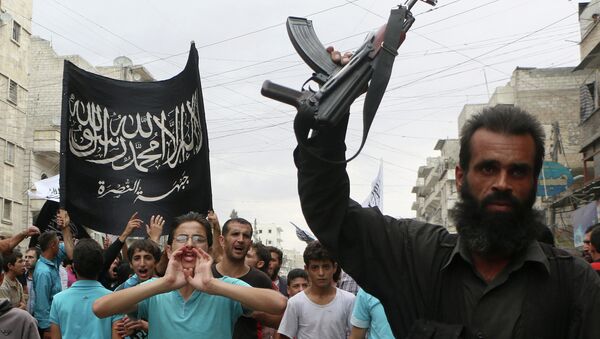 The specter of a proxy war between Russia and the United States is prowling around the Middle East, academic and 28-year veteran of the Central Intelligence Agency (CIA) Paul R. Pillar notes, drawing historic parallels between Moscow's current operation in Syria and the USSR's involvement in Afghanistan.

Although Russia's Syrian military campaign indeed bears some resemblance to what occurred in Afghanistan in the 1980s, Washington should not delude itself into repeating Ronald Reagan's strategy.

"The Afghan mujahedin's war against the Soviets is the subject of fond Cold War memories of many people on the US side of the Cold War divide. The effort, begun under Jimmy Carter and continued under Ronald Reagan, to supply the mujahedin is widely perceived as having been instrumental in defeating the Soviets in Afghanistan, a defeat that in turn is often seen as contributing significantly to the downfall of the Soviet Union itself," Pillar wrote in his blog post at The National Interest's website.

Game-Changer: Russia's Involvement in Syria Shifts Balance of Power
However, referring to the US' Afghani "success," American policymakers usually focus "too narrowly and shortsightedly" on defeating the USSR, while turning a blind eye to the fact that Afghanistan then turned into a 14-years political and military quagmire for Washington.

Those who demand that Assad "must go" should remember that "one of the principal lessons from Afghanistan" indicates that the defeat of a despised regime does not automatically lead to peace, let alone anything resembling democracy, the CIA veteran underscored.

"The post-Najibullah phase of Afghan history demonstrated the pattern seen elsewhere as well, and being seen today in Syria, of radicals crowding out moderates in a situation of prolonged warfare and instability. It is in the nature of such situations for such a pattern to prevail, civil war being an inherently immoderate thing to wage. In Afghanistan, the Stingers and other US aid bought the United States little or nothing in the way of subsequent influence," Pillar stressed.

Furthermore, it would be dangerous to provide "the fractured Syrian opposition" with US sophisticated anti-aircraft weaponry, since it would result in a "significant chance" that such weapons would be used against the US Air Force.

"The comparison with Syria ought to be too obvious to need much reflection, given the current reality of the radical group ISIS [ISIL], as well as an Al Qaeda affiliate, forming a major part of the alternative to the Assad regime," the CIA veteran reminded.

Syrian Chessboard: How Putin Will Win Out Over US Grandmasters
Washington's policy-makers should also remember that there is not a Cold War anymore between the West and Russia and "countering Russia" has never been a part of the US strategy in Syria. By messing up the original reason for the US to get involved in the Syrian conflict US politicians would succeed in transforming "the potential proxy war" between Moscow and Washington into a "real one," the expert warned.

Those American policy-makers who are now pointing the finger at Russia for aggravating tensions in Syria, should ask themselves whether they want to spend another 14 years settling the crisis in Syria.

"For now we ought to be glad to the extent that the costs of proto-quagmire fall on Russia and not on the United States," Pillar noted.

"We also ought to look to other silver linings in the gambit — which admittedly assume that Putin is as smart as he often is cracked up to be: that the Russian leader knows the only way to step out of a costly quagmire is to work diligently with other outside powers to negotiate some sort of resolution of the Syrian conflict," the CIA veteran underscored.