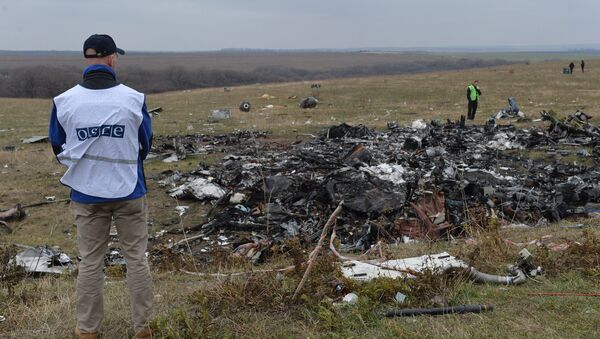 Russia has identified many irregularities in the MH17 flight crash inquiry by the Joint Investigation Team (JIT) comprised of investigators from the Netherlands, Australia, Belgium, Ukraine, and Malaysia, Foreign Minister Sergei Lavrov said on Monday.

MOSCOW (Sputnik) — In July, the Netherlands, Australia, Belgium, Ukraine, and Malaysia put forward a joint proposal to set up an independent tribunal to prosecute those responsible for the plane crash.

Russia vetoed the UN Security Council draft resolution to establish the international tribunal. Moscow insisted on waiting first for the publication of the final report by the Dutch Safety Board, the body leading the investigation. The final results of the inquiry are due on Tuesday.

"We’ve been noticing all kinds of irregularities in the actions of these five countries," the Russian foreign policy chief told reporters after meeting Lamberto Zannier, Secretary General of the Organization for Security and Co-operation in Europe (OSCE).

"Initially, they did not invite Malaysia, the owner of the plane and the airline’s register location… They did not invite ICAO, which is common. They adopted a UN Security Council resolution, ignored it and never reported on its implementation. They did not remove plane debris and bodies for a long time," Lavrov said.

The diplomat said Russia was the only country to share its satellite imagery from the scene of the crash, while the United States has not. Similarly, Ukraine did not provide air traffic control records from the time of the crash.

"They only remembered about the UNSC once they decided to set up a tribunal. If they really want to turn to [the Council], well it has its own procedures," Lavrov said.

The Malaysian airliner crashed in 2014 in southeastern Ukraine, killing all 298 people aboard.

Australia’s Foreign Minister Julie Bishop said last month that the five JIT countries were set to launch a tribunal to identify and prosecute those responsible for the downing of flight MH17 without UN participation or approval.