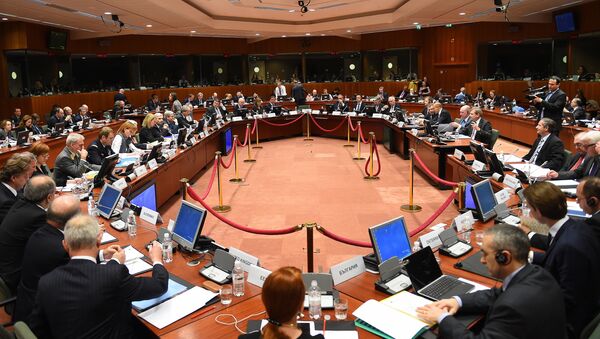 The top diplomats of the European Union will convene a Foreign Affairs Council to discuss the latest developments in Syria, Libya and the migration crisis plaguing Europe on Monday.

LUXEMBOURG (Sputnik) – First on the council’s agenda in Luxembourg are the latest developments in Syria and what the background notes describe as "political consequences of the military escalation on the ground." The ministers are expected to adopt a document on the Syrian conflict assessing Russia’s air campaign against Islamic State (ISIL) jihadist group and other terrorist targets it launched on September 30.

A senior EU representative told reporters earlier that all member states of the bloc are united in supporting the fight against the ISIL and al-Qaeda-affiliated Nusra Front, but are concerned about Russian airstrikes over Homs and Hama provinces.

The ministers are expected to approve the possible involvement of Syrian President Bashar Assad in political transition talks in the country. The EU official said the ministers will urge Russia, Iran and other powers that have influence on Syrian leadership to facilitate the creation of humanitarian corridors in the country.

Advance in Donbas Timed by Kiev Ahead of EU Foreign Affairs Council Meeting
Second, the Foreign Affairs Council will follow up on last Thursday’s conference on migrant routes to exchange views on the external aspects of Brussels’ migration policy. The diplomats are expected to adopt conclusions and prepare for next month’s Valetta Summit on migration.

The senior EU figure told reporters that Foreign Affairs Council members will back the forming a national unity government, with Fayez Sarraj tipped to be the proposed prime minister. The official added that the European Union is considering imposing sanctions on political sides that undermine the peace process, although the decision is not likely to be reached by Monday.

Although the presidential elections in Belarus are not formally on the agenda, EU foreign policy chief Federica Mogherini is expected to give her assessment to the ministers. The European Union, intending to ease restrictive measures against the country after the latest releases of political prisoners, is said to be more steadfast in lifting anti-Belarus sanctions.