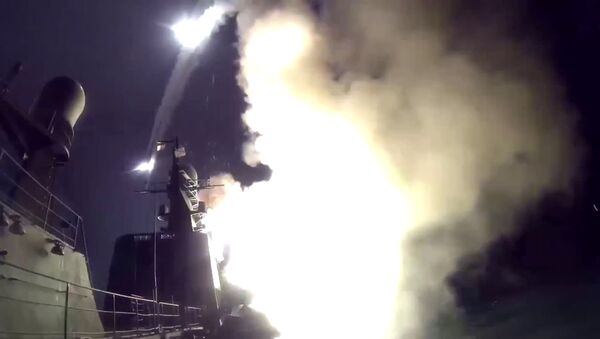 © Russian Defense Ministry
/
Go to the photo bank
Subscribe
On Wednesday Russia’s Caspian Sea flotilla fired 26 rockets on ISIL positions in Syria. Later, on Thursday, an unnamed US government source told CNN that the missiles landed in Iran, without specifying the actual location of the fall.

The Iranian defense ministry noted that the reports were just a part of ongoing propaganda war.

Moscow launched airstrikes on ISIL and other terrorist groups in Syria on September 30, following a request from the current president of the Arab republic — Bashar al-Assad.

Theodore Karasik, a UAE-based Geopolitical Advisor based in Dubai, spoke to Sputnik in an exclusive interview.

“I think there is definitely an information war being conducted by the United States and its allies against Russia simply because Moscow has taken the initiative against ISIL and at the same time trying to find the transition formula to move President Assad to another position or even out of the country,” Karasik said.

The advisor also said, “The success of Russians in Syria already to date has outstripped operation Inherent Resolve led by the United States. I think that it is making some policy makers in the US upset because they have drifted away from the message they wanted to put forward.”

‘Obama Has Been Rolled by Putin Like Sushi Roll’- US Presidential Candidate
He also went on to say that there is an ongoing discussion between the Pentagon and the Russian Ministry of Defense. Jordan is also involved in the talks as the US and Russia has good relations with King Abdullah.

“There is ongoing talk but at the highest level of government there is going to be disagreement for the near term.”

Talking about these disagreements Karasik elaborated, “There are tensions underneath the surface. Russia is taking action and this attack from the flotilla in the Caspian Sea is very interesting because this really showed how serious Russia is and where Moscow can reach from.”

The advisor also said that Iraq has been with Moscow for the last two years. It resulted in relations between the two countries. Now Iraq is part of the Russian alliance to try and answer the problems of Islamic State. “Iraq needs a lot of help too, that is why there is a coordination center in Baghdad with Moscow and Iran being involved.”

Merkel: Resolution of Syrian Crisis is Impossible Without Putin, Assad
Talking about the US and the European foreign policy he said that it is a complete failure because they did not deal with the issues in the Middle East region adequately.

“The current migrant crisis is the spillover effect of this and it is dividing the EU politically and also it is going to challenge the EU in the future in terms of employment, education and healthcare.”

Russia’s involvement in Syria is an attempt to fix the situation instead of complicating it further.

“In Europe a lot of policy makers are afraid of the presence of Islamic State militants in the migrant groups that are going to the European continent. I think that over time we will see an uptick in Islamic terrorism in Europe, so the argument that Russia is trying to help Europe stop this flow is probably an accurate argument.”