Why Russia Could Win the Fight Against ISIL in Syria 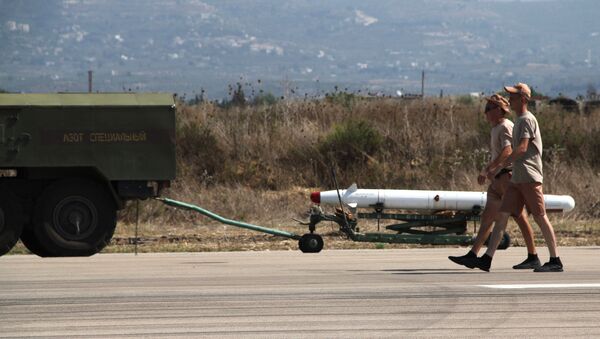 © Sputnik / Dmitriy Vinogradov
/
Go to the photo bank
Subscribe
Since the beginning of the air campaign Russian air forces have carried out about 140 strikes against terrorist positions in Syria.

The targets of the airstrikes included command centers, training camps and ammunition depots, with Russian warships in the Caspian Sea having fired 26 cruise missiles on ISIL positions.

Russia Versus ISIL: Here's What Happened So Far
The Russian Defense Ministry said that the airstrikes have considerably damaged Islamic State's command and logistics networks, as well as infrastructure used to equip suicide bombers.

According to some analysts the Russian airstrikes in Syria may be more effective than the US-led air campaign for one simple reason: Moscow is in close cooperation with the Syrian ground forces.

“The Western campaign against ISIL has failed because there is no human intelligence there,” Royal United Services Institute analyst Kamal Alam said, speaking at an event held at the Center for the National Interest, “The Russians are going to be more embedded with the Syrians.”

While the US military has a lot of ways to gather intelligence in Iraq and Syria, specific targeting in densely populated areas with civilians present often poses huge challenges for analysts trying to distinguish between friend and foe.

Military Operation in Syria May Return Russia’s Status as World Power
“With no ground units available, Air Force analysts typically depend on the local US embassy in a targeted country. However, in Syria, there is no US diplomatic presence to speak of, while the US embassy in Iraq is located in Baghdad—far away from ISIS-occupied territory. ‘You could have a dialogue with them to get context,” 480th ISR Wing Commander Col. Tim Haugh said. “There is no [Army or Marine] captain on the ground to talk to,” American magazine The National Interest wrote.

Talking about Russian Forces, Paul Saunders, executive director of the Center for the National Interest, said that there is no evidence that Russian special operations forces are on the ground providing targeting data, instead the Russian air force is relying on Syrian troops for intelligence.

He also said, “What they are saying is that they are unique because they have been invited by the Syrian government,” Saunders said. Hence the airstrikes are going to be more effective because they are coordinating with Syrian forces on the ground.

“Overall, the Russians appear to be positioning themselves to influence a negotiated end to the Syrian conflict once they are assured their interests are taken into account,” The National Interest concluded.