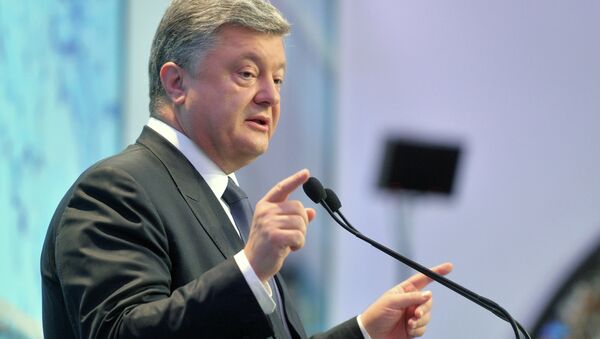 © AFP 2023 / GENYA SAVILOV
Subscribe
International
India
Africa
According to the Ukrainian leader, the Russian Air Force’s operation in Syria against ISIL is leading to global instability. On the eve of Petro Poroshenko’s accusation, Damascus said that Russian jets have destroyed 40% of the terrorists’ infrastructure.

In an interview with BBC ‘News Night,’ he said that “Vladimir Putin wants global instability,” comparing the operation of the Russian fighter jets in Syria to the situation in Donbass, where according to him, “15 months ago there were Russian soldiers.” However, he again gave no evidence of the presence of the Armed Forces of the Russian Federation in Ukraine.

According to Poroshenko, Putin is bent on creating global chaos “because of the economic problems and loss of support in his own country.” But according to the latest polls, Poroshenko himself has only 3% of supporters amongst the respondents with 33% not in support.

Odessa Protesters Demand Poroshenko’s Resignation
Kiev has repeatedly declared that Russia supplies the armed militias of Donbass and the Russian military has presence in the region. However, Moscow denies the charges, calling the conflict internally Ukrainian.

Since September 30, at the request of Syrian President Bashar al-Assad, Russia has been conducting precise airstrikes on ISIL targets in Syria, using Su-25 frontline bombers, Su-24M, Su-34, and Su-30 CM.

However, the coalition, led by the US since September 2014, has carried out strikes on the positions of ISIL in Syria bypassing the UN Security Council and without coordinating the strikes with the Syrian authorities.