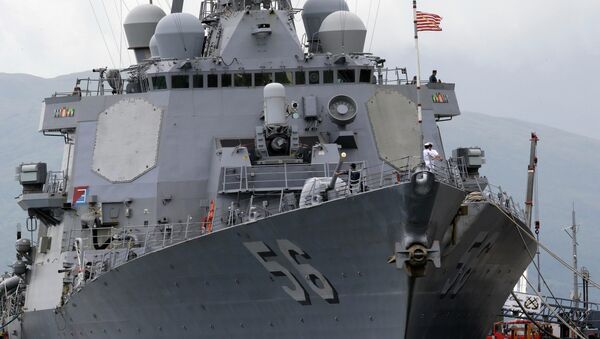 A Pentagon official said the United States was considering sending ships within the next two weeks to waters inside the 12-nautical-mile zones that China claims as territory around islands it has built in the Spratly chain, Reuters reported.

US Media Wonders Why China 'So Ambiguous About Syria'

China claims most of the South China Sea, though Washington has signaled it does not recognize Beijing's territorial claims and that the US Navy will continue to operate wherever international law allows.

"We will never allow any country to violate China's territorial waters and airspace in the Spratly Islands, in the name of protecting freedom of navigation and overflight," Hua told a regular news briefing.

"We urge the related parties not to take any provocative actions, and genuinely take a responsible stance on regional peace and stability," she said of the United States.

US-based military newspaper Navy Times reported that Washington was leaning towards sending warships to the waters. It said China's reclamation projects had become a growing source of tension and posed serious threats to freedom of navigation.

Citing Pentagon officials, the report said the ships would set off "within days" of the mission getting the final approval from the Obama administration. Navy officials said they believed the approval was imminent.

Military experts said the People's Liberation Army Navy would issue warnings and there would not be collisions if foreign military vessels went within the limits. Li Jie, a Beijing-based naval expert, said the navy would send warships to intercept the US vessels if they ignored the warnings.

While China insists has no intention of militarizing the artificial islands, Washington says Beijing has already begun creating military facilities there.

China's territorial claims in the South China Sea overlap with the claims of the Philippines, Vietnam, Malaysia, Brunei and Taiwan.