Oklahoma Executioners May Have Injected Condemned Man With Wrong Chemicals 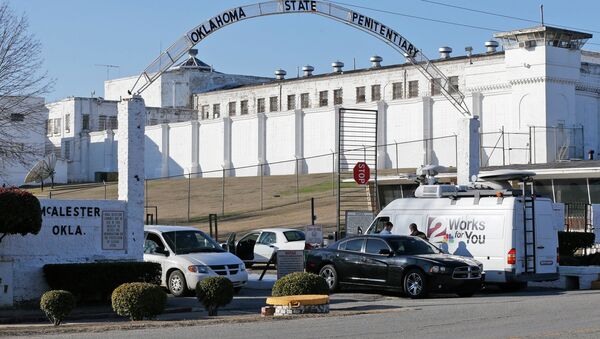 © AP Photo / Sue Ogrocki
Subscribe
International
India
Africa
The State of Oklahoma has become embroiled in a scandal as it faces allegations that it may have used the wrong drugs to execute Charles Warner earlier this year.

United States to Execute 3 People in Next 72 Hours
Though executed via lethal-injection in January, an autopsy report on Charles Warner was only recently completed, and it's causing problems for a state frequently at the center of the capital punishment debate.

To conduct the autopsy, empty vials used during the execution were delivered to the state's Office of the Chief Medical Examiner. Those containers were labeled as "potassium acetate," even though the state's protocol calls for "potassium chloride."

The revelations come only one week after Oklahoma authorities delayed the execution of Richard Glossip. That decision came after authorities discovered that their injection vials were filled with the wrong kind of potassium.

"As an act of precaution, the attorney general and I decided to stop the execution," Gov. Mary Fallin (R) said in a statement. "During the discussion of the delay of the execution it became apparent that [Department of Corrections] may have used potassium acetate in the execution of Charles Warner in January of this year."

Oklahoma's Attorney General Scott Pruitt has launched an investigation to uncover any past instances "relevant to the use of potassium acetate and potassium chloride," and stressed that his state "has a strong interest in ensuring that the execution protocol is strictly followed."

In light of the revelations, Director of the Oklahoma Department of Corrections Robert Patton told journalists that he believed the two drugs to be "medically interchangeable." David Gortler, an associate professor of pharmacology at Yale University, defended this view.

"Potassium is potassium," Gortler told the Washington Post. "The pharmacology isn't that much different between the different salts."

As the investigation is ongoing, the Oklahoma Department of Corrections has declined to comment.

"As you are aware the Attorney General's office has opened an inquiry," Patton said in a statement e-mailed to the Washington Post on Thursday. "Out of respect for that inquiry we will not making any comment at this time."

Oklahoma's current execution protocol was adopted last year after the infamously botched execution of Clayton Lockett. Witnesses reported that he was moving, groaning, and trying to rise from his chair throughout the 43 minute ordeal.

Warner was the first person to be executed in the state since the nationwide outcry caused by Lockett's death.

While most Americans support the death penalty, the US has experienced a shortage of lethal-injection drugs as European suppliers cut off access in protest of capital punishment.