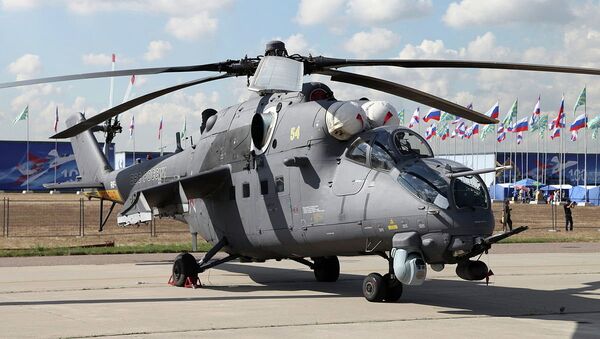 Russia plans to sign a contract on the delivery of several Mi-35 helicopters to Afghanistan.

MOSCOW (Sputnik) – Russia will continue providing support to Afghan government forces and plans to sign a contract on the delivery of several Mi-35 helicopters to Afghanistan in October, Russian presidential envoy to Afghanistan and head of the Russian Foreign Ministry's Second Asia Department Zamir Kabulov told the Izvestia newspaper.

According to the Russian envoy, this process will continue and Afghanistan will receive more Russian aid in the near future.

Russia, Pakistan Negotiating on Military Mi-35 Helicopters Deal
"We plan to conclude a contract with the Afghan side in October on the delivery, on a commercial basis, of several Mi-35 combat helicopters," Kabulov told the Russian Izvestia newspaper.

He stressed that the key to peace and security in Afghanistan is not the foreign troops present in the country.

"Afghanistan has an army and many Afghans are capable of bearing arms and know how to use them well. We need to strengthen the national potential, and not try to defend the Afghan government with foreign troops," Kabulov said, adding that the presence of NATO/US forces in the country has led to the rise of extremists, not their decline.

Afghanistan continues to be in a state of political and social turmoil as the Taliban and Islamic State (ISIL) radicals take advantage of instability in the country, which has persisted since the 2001 US-led invasion.

On Thursday, Chief of the General Staff of the Armed Forces of Russia Gen. Valery Gerasimov said that the number of ISIL militants in Afghanistan stands at around 2,000-3,000 and is growing constantly.