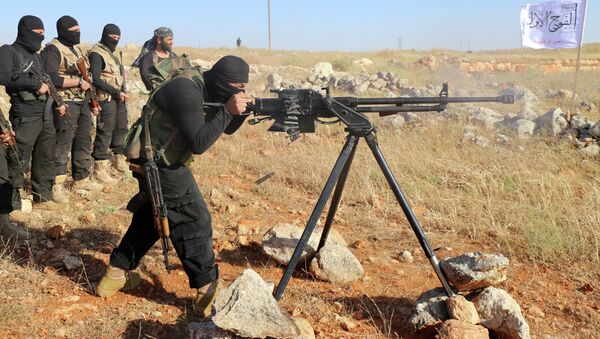 © AFP 2021 / BARAA AL-HALABI
Subscribe
What the United States terms as a moderate Syrian opposition faction fighting against Syrian President Bashar Assad does not exist, and is being used by Washington to justify its support for extremists, experts told Sputnik on Thursday.

MOSCOW (Sputnik) — Earlier this week, US State Department spokesman Mark Toner said Washington was well aware of the positions of moderate Syrian opposition factions, yet when asked whether Washington would share this information with Moscow, Toner replied with the statement, "we are confident that Russia knows what’s happening on the ground there."

Russian Foreign Minister Sergei Lavrov said Monday that Moscow was ready to establish contact with the Free Syrian Army, but that it currently appears to be a "phantom." He added Russia sent a request about the group to Washington.

Seyed Mohammad Marandi, a professor at the University of Tehran, said Washington knows exactly where the different extremist groups in Syria are located, but also that "the US knows quite well that there is no Syrian moderate opposition."

"The notion of a Syrian moderate opposition has always been a myth. This is something that was clear to anyone who knew what was going on in Syria from almost the beginning."

Jason Hirthler, a political commentator and author, agreed that "the idea of a ‘moderate’ opposition is a term that Washington invented to rationalize its support for jihadists in Syria."

Hirthler explained to Sputnik that Washington seeks to destabilize the Syrian state – whether by "hijacking a small legitimate movement or creating an illegitimate resistance out of whole cloth" – since it could not simply tell the Americans it was funneling money and weapons into Islamist hands, including al-Qaeda affiliates.

Soraya Sepahpour-Ulrich, an independent researcher and political commentator, agrees, saying that the United States now controls the narrative of distinguishing between a Syrian opposition faction and any other terrorist group, so that "any terrorist act by the CIA-backed group attributed to the ‘good guys’ is not considered terrorism."

"From a US perspective, a moderate opposition – whether in Syria or elsewhere, is a paid mercenary or a terrorist who is attempting to achieve America's goals."

Syrian Crisis: What if Assad Repeats Fate of Gaddafi?
Seyed Marandi also noted that Washington's goal is to overthrow the government of democratically-elected President Bashar Assad, adding that the United States would go so far as to use jihadists to achieve their goals because Assad's fall is "more important […] than the defeat of ISIL, the rise of which it both foresaw and tolerates."

"We've used it in Afghanistan and most recently in Libya. It has been successful in achieving regime change, but the outcome is disastrous for the general population. The outcome is usually a failed state presided over by a warlord who is amenable to Washington's regional goals," Hirthler said.

"The whole goal of the United States has been to create instability in Syria (as in elsewhere in the region). It is following a Total War concept and does not distinguish between ‘opposition’ and ‘terrorist.’ They both serve its goal," Sepahpour-Ulrich said, adding the United States has been battling against what it previously termed a "moderate" Taliban for the past 14 years.

Since the beginning of the Syrian civil war four and a half years ago, the United States and some of its allies have supported what they call a "moderate" armed Syrian opposition faction, which Washington claims is fighting government forces in the country.

000000
Popular comments
Syrian Moderate Opposition Myth Exists to Justify US Support for Extremists However they will try to sell it to you there is one way to JUSTIFY the u.s support for terrorist "PERIOD"!!!