Why the Yuan is Catching up to the Greenback 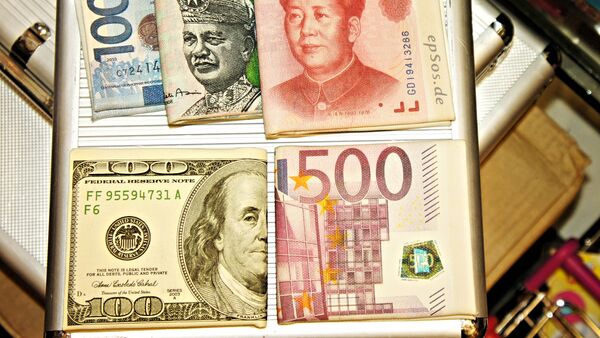 Expert Yaroslav Lissovolik told Radio Sputnik that the preeminence of the US dollar is being challenged by the world's central banks' search for alternative reserve currencies, such as those of emerging markets, and gold.

While the US remains a safe haven for investment, its preeminence is being challenged by the increasing use of emerging market currencies such as the Chinese yuan for international trade, and central banks' need for more reserve currencies, Yaroslav Lissovolik, Professor of International Economics at Russia's Diplomatic Academy, told Radio Sputnik.

Several emerging markets — including China, Brazil, Russia and Taiwan — have recently been selling US treasury bonds at the fastest pace since 1978.

Low interest rates in the US also give central banks reason to diversify into emerging market currencies, in order to seek higher yields and high return.

Chinese Central Bank to Issue Short-Term Renminbi Bonds in London
"There are not enough reserve currencies out there in the world, there is a shortage of them."

"In order for that trend to continue you need more emerging markets like China, like for example Brazil, Russia, to stabilize their economies, raise their share in the world economy in terms of financial transactions, and then there's more scope for the central banks of the world to use their currency, as reserve currency."

AIIB President Describes Launch by End of 2015 as Priority
The Chinese yuan, which is the fourth most popular currency for financial market operations, is one such candidate, said, Lissovolik, and the Chinese government's loosening of currency control makes it more attractive as a potential reserve currency for the world's central banks.

In addition, the Asian Infrastructure Investment Bank will also increase the share of emerging markets in financial transactions and the world's investments, by conducting investment for infrastructure projects.