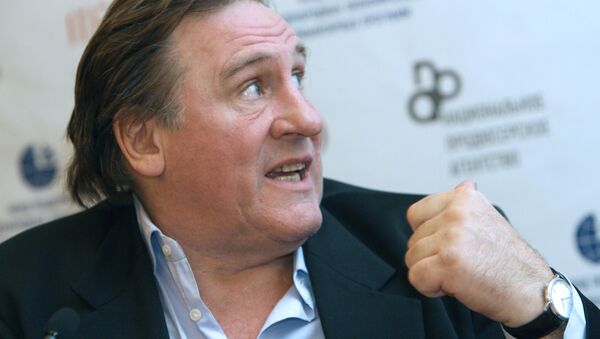 © RIA Novosti . Mikhail Fomichev
/
Go to the photo bank
Subscribe
Gérard Depardieu appears not to have many regrets about his decision two years ago to take Russian citizenship, as he’s revealed his conviction that Europe’s failures in foreign policy are all the US’ fault.

Madness Ukrainian Style, Depardieu Movies Banned - German Media
"If the Europeans stopped listening to the Americans, well, I'd be a lot happier," the actor told Russian journalists on Wednesday.

The popular French actor repeatedly slammed his native country of France for unreasonably high taxes before being granted Russian citizenship in 2013 by President Vladimir Putin.

Depardieu became a huge international star at young age, and featured in such films as "The Man in the Iron Mask," "Les Misérables," and "Green Card," in which, some 15 years ago, he played a French man desperate for American citizenship.

But real life, as we know, is a far cry from Hollywood fantasy.

"I have never wanted to be a US citizen," he said. "That's totally out of the question. They have a very aggressive culture. And I don't like US films," he added in his interview to RIA Novosti on Wednesday.

"They fought each other, destroyed the Indians, after that they perpetrated slavery, then there was the civil war," the actor said, giving a rundown of the US' violent history.

"After that, they were the first to use the atomic bomb…No, I prefer being Russian," added Depardieu.

Depardieu has recently said he has intentions to sell all the houses he owns in France in order to be rid ties to his native country. The actor also revealed his plans to move to Belarus, as he is fascinated by the country's leader, Alexander Lukashenko, saying "the country is beautiful and the president is a nice guy".

Russian citizenship has become somewhat sought-after for western stars following Depardieu's move. Fred Drust, front man of the the US band Limp Bizkit, and tattoo artist Zombie Boy have both confessed they'd like to trade their passports for Russian ones.

000000
Popular comments
I like Gérard, he is a smart man indeed.

joq qy
9 October 2015, 00:34 GMT2
000000
I think that the feeling of many people about Russia would change if they had the opportunity to stay there for some time. Don't hesitate: visit Russia, get out of prepared travel tours, meet ordinary people, you will be at least amazed. And full of nostalgy when coming back home.
Ny, Pogodi !
9 October 2015, 12:54 GMT
000000
Newsfeed
0
New firstOld first
loader
LIVE
Заголовок открываемого материала
Access to the chat has been blocked for violating the rules . You will be able to participate again through:∞. If you do not agree with the blocking, please use the feedback form
The discussion is closed. You can participate in the discussion within 24 hours after the publication of the article.
To participate in the discussion
log in or register
loader
Chats
Заголовок открываемого материала
Worldwide
InternationalEnglishEnglishMundoEspañolSpanish
Europe
DeutschlandDeutschGermanFranceFrançaisFrenchΕλλάδαΕλληνικάGreekItaliaItalianoItalianČeská republikaČeštinaCzechPolskaPolskiPolishСрбиjаСрпскиSerbianLatvijaLatviešuLatvianLietuvaLietuviųLithuanianMoldovaMoldoveneascăMoldavianБеларусьБеларускiBelarusian
Transcaucasia
ԱրմենիաՀայերենArmenianАҧсныАҧсышәалаAbkhazХуссар ИрыстонИронауОssetianსაქართველოქართულიGeorgianAzərbaycanАzərbaycancaAzerbaijani
Middle East
Sputnik عربيArabicArabicTürkiyeTürkçeTurkishSputnik ایرانPersianPersianSputnik افغانستانDariDari
Central Asia
ҚазақстанҚазақ тіліKazakhКыргызстанКыргызчаKyrgyzOʻzbekistonЎзбекчаUzbekТоҷикистонТоҷикӣTajik
East & Southeast Asia
Việt NamTiếng ViệtVietnamese日本日本語Japanese中国中文Chinese
South America
BrasilPortuguêsPortuguese
NewsfeedBreaking
09:40 GMTChild Abusers in UK Could Face Up to Life in Prison – Government
09:40 GMTCrown Prince Says Japan Needs Norms Against Media Slander
09:00 GMTUS to Upgrade Military Infrastructure, Develop New Bases in Australia, Guam to Counter China
08:53 GMTMoscow Rejects US Claims on Religious Persecution in Russia, Pledges Retaliation
08:44 GMTGhislaine Maxwell Likened to 'Eve in Garden of Eden' For Being 'Vilified' For Epstein's Sex Crimes
08:28 GMTCOVID-19 Live Updates: China Says 2022 Winter Olympics to Be Held as Planned Despite Omicron Spread
08:27 GMTCasualties Feared as Military Helicopter Crashes in Azerbaijan
08:15 GMTEt Tu? US Steals Most of Australia's Sale to China Amid Trade Row, Finds Study
07:49 GMTModerna CEO Thinks COVID-19 Vaccines Will Lose Efficacy Due to Omicron Strain
07:48 GMTLawyer Calls Jussie Smollett 'Real Victim' as Prosecutor Slams Actor's 'Secret Plan' for Hate Hoax
07:14 GMTBiden Axes Supply Chain Crisis Address, Seeks 'Ample Time' to Meet Business Leaders at White House
06:55 GMTSwedish Professor Pins COVID-19 Mutations on Skewed Vaccine Distribution
06:51 GMT'Happy Day': Indians Excited as Parag Agrawal Appointed Twitter CEO
06:45 GMTBill Seeks to Bar Politicians With Criminal Charges From Serving as Israeli PM, But Is It Realistic?
06:34 GMTJapan Supports Postponement of WTO Meeting Due to Omicron Variant
06:22 GMT'Insult to Legacy': Gucci Heirs Threaten Lawsuit Over 'House of Gucci' Movie
06:09 GMTFamily in India 'Robbed on Pretext of Vaccination Against Omicron Strain'
06:09 GMTPolice Reportedly Search Marilyn Manson's LA Home Amid Probe Into Sexual Assault Claims
06:01 GMTIslamists, Terror Financiers and Motorcycle Gangs Reportedly Received COVID-19 Aid in Sweden
05:28 GMT'Shine Like a Diamond': Barbados Declares Rihanna National Hero as Island Becomes Republic - Videos